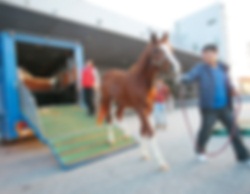 A groom at a racetrack in Gyeongju, North Gyeongsang, hanged himself in a motel room Wednesday and left behind a suicide note saying his job was like “being in a jail.”

“I’ve been on 12 night duties a month,” the note read. “I fell from a horse and had fractures and a concussion but couldn’t ask for treatment due to fear of getting fired.”

His suicide has focused attention on working conditions for racetrack grooms in Busan, which are allegedly much worse than in Seoul.

“Grooms in Busan are the modern version of slaves,” said a former groom, who requested anonymity. “I felt like I was sold as a slave into endless work.”

In Seoul, one groom takes care of three horses, and in Japan, grooms take care of two horses. In Busan, Park and another groom were in charge of 17 horses.

Grooms feed and bathe horses, clean the stables and also check the condition of horses before races by riding them around the track, which can lead to injuries.

Park wrote in his suicide note that he had “five fractures in seven years and a concussion,” and added, “I couldn’t receive proper treatment as the trainer called me repeatedly while I was hospitalized asking when I would come back to work.”

The average monthly wage for grooms in Korea is 3.4 million won ($3,000), but those working for trainers only take home about 1.7 to 2 million won a month.

In Seoul, the Korea Horse Racing Authority gives 5 million won per groom per month to the Seoul Racecourse Trainers Association and most grooms get similar salaries. In Seoul, 90 percent of a groom’s salary is fixed, and the remaining 10 percent is paid in bonuses, which fluctuate depending on the performance of the horses in races. In Busan, only 40 percent of monthly salary is fixed and the balance depends on the result of races.

“In Hong Kong, the racing authority employs grooms,” said Moon Su-yeol, 41, branch manager for the Busan Gyeongnam track at the Korea Horse Grooms’ Labor Union. “Employment stability and the salary for grooms should be made transparent so that they can be treated as proper human beings.”