Returning home is hard to do

Returning home is hard to do 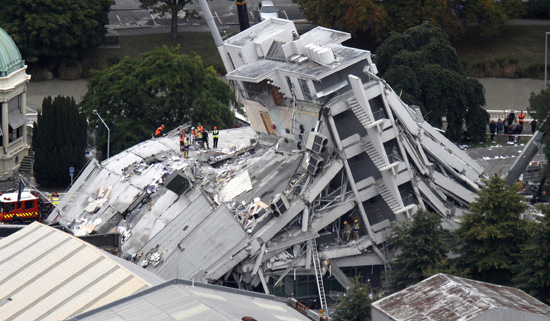 A 6.3-magnitude earthquake hit Christchurch of New Zealand in February. That quake, plus hundreds of aftershocks, destroyed buildings and homes and killed 181 people. About 1,000 Korean residents among 5,000 in Christchurch fled the country in an exodus, the majority returning to Korea. [YONHAP]

About eight years ago, Park Hye-min, 53, took her 21-year-old son and 15-year-old daughter to settle down in the peaceful country of New Zealand, about 4,000 miles away from her hometown of Seoul, in hopes of starting a new life after divorcing her husband.

A year later in 2005, Park obtained a working visa and opened up a Korean restaurant in the South Island city of Christchurch and managed to send her two children to college. Park’s two children were happy and adapted well to the Western environment, and the three were getting very close to obtaining permanent residency in New Zealand.

But in September last year, when a 7.1-magnitutde earthquake struck the city, it demolished Park’s restaurant, which was located downtown - the hardest hit area.

“I’ve never experienced such a shake in my entire life,” recalled Park. “But people soon comforted each other and thanked God that there weren’t any casualties.”

When people began to calm down and regain their footing, another 6.3-magnitude jolt hit the already devastated city on Feb. 22, 2011 and this time killed 181 people, wrecked houses, split roads and closed down businesses.

Hundreds of aftershocks followed, and the exodus was under way.

According to Statistics New Zealand, about one-fifth of Christchurch’s 350,000 inhabitants left the city with no plans to return any time soon, including about 1,000 Koreans. And Park was one of them.

“I had no choice. The first earthquake turned my restaurant into rubble and my home was in the ‘orange-zone,’ in which the government was considering whether to evacuate all residents and rebuild the land, but they kept on delaying,” Park said. “Plus, I was notified that the visa proceedings that my family was waiting for were postponed without a date due to the earthquake. So we packed the remains of our belongings and left the country to return to our own.”

Koreans who left their homeland in hopes of starting a new life or achieving their goals are returning to Korea after several countries that seemed to be lands of new dreams turned out to be disappointments.

But many of the returned Koreans are finding it difficult this time to settle down in their home country.

Park’s son Kim Dong-hwan, who is now 29, worked for a trading company after graduating from college in Christchurch. But since his family returned to Korea in June, all he has been doing is writing CVs.

“My son and daughter are both having a hard time adapting to Korean culture again after all this time. I tried to make them forget about Korea and only think about becoming successful in New Zealand,” Park said. “But there was no choice and we have to find a way to come through in Korea anyhow.”

Cho Min-kyung, 27, who returned to Seoul after leaving the country for five years, said she had to give up her dream job in Japan when an 8.9-magnitude earthquake hit off of the east coast of Japan in March that also triggered a 23-foot tsunami, killing hundreds and striking the Fukushima Daiichi nuclear power plant that raised radiation levels across the country.

“I just graduated last year from fashion school and finally got a job in the same industry in Tokyo. It was difficult for me to learn the language and also study at school, but I survived and was so glad to finally work in Tokyo,” Cho said. “But then the disaster occurred and my parents no longer allowed me to stay there.”

After arriving in Seoul at her parent’s house in late March, Cho tried to get a job in the fashion industry in Korea. But after 12 failed applications, Cho gave up her dream job and has been working at a travel agency in Jongno District, central Seoul, since mid-September.

“Many of my friends also had to come back and are either looking for jobs or trying to transfer to schools in China or other countries,” Cho said.

Kang Myung-il, 29, who grudgingly left Christchurch after spending most of his 20s there and went back to Seoul in late March, said he felt like he did not belong anywhere.

“I was trying to obtain citizenship in New Zealand and put so much energy and passion into building a life there but all that passion seemed to crumble away along with all the destroyed buildings and houses after the earthquake,” Kang said. “I didn’t want to come back to Korea, but I had no choice. After saving up some money, I’m going to move to somewhere else.”

After submitting 16 applications within a month, Kang got a job in Seoul but said he will leave the country next year for Kenya.

To help overseas Koreans who returned, the Overseas Korean Technology Education Support Center, which is operated by the Korea Immigration Service, connects them with education or training facilities to help them acquire jobs in Korea. It also helps those with foreign citizenship change their visa status to D-4, which allows them to stay in Korea for a year to receive training.

“We want to support overseas Koreans who returned to Korea to stay here without restrictions and be treated equally as Korean citizens,” said Lee Hong-dae, director of the center. “Before this system of supporting overseas Koreans to settle in Korea was established, many of them had to leave the country without fulfilling what they came here for due to visa limitations. That’s why we offer education and training at a low cost as well as issue visas that would allow them to stay here longer.”