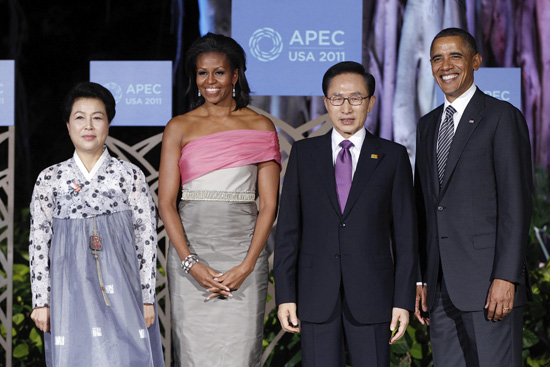 U.S. President Barack Obama and Michelle Obama, first lady, greet Korean President Lee Myung-bak and the first lady, Kim Yoon-ok, as they arrive at the opening dinner of the Asia-Pacific Economic Cooperation forum’s Leaders’ Summit in Honolulu on Saturday. Lee said he believes the free trade agreement with the United States will ultimately pass through the National Assembly despite the impasse between the ruling and opposition parties. Lee made the remark during a meeting with Korean residents in Hawaii a day after he arrived for the APEC summit. [REUTERS/YONHAP]