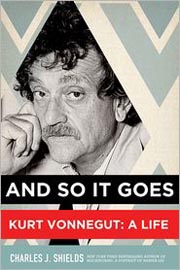 Kurt Vonnegut liked to show visitors the dictionary. “Look me up,” he would say. “Nothing. Now look up Jack Kerouac.”

The author of “Cat’s Cradle,” “Slaughterhouse 5” and “Breakfast of Champions,” who died in 2007, was frustrated by his standing in American letters and felt he was perceived as a science-fiction writer, one not warranting a dictionary entry.

But Vonnegut’s two-dozen novels and story collections spoke to the human condition and humorously showed some of the absurdities of post-war America.

Vonnegut was shaped by two key experiences in his 20s: his mother’s suicide, and surviving the bombing of Dresden as a prisoner of war.

Biographer Charles Shields, who previously told the story of Harper Lee in “Mockingbird,” describes his subject, whom he got to know well, as a “disenchanted American.”

The author of the authorized “And So It Goes - Kurt Vonnegut: A Life” spoke to Reuters about the author’s personality and legacy.


Q. How did this project get started?

A. We began corresponding in the summer and fall of 2006. Then the phone calls and postcards started. He would call late at night after he’d had a couple, it sounded like. The first time I met him he wanted to start talking right away about his childhood, his family, his resentments as a teenager. So I started writing like mad. The success of our phone calls depended on what kind of mood he was in. Vonnegut was a moody man, a little thin-skinned.

Did he feel snubbed by the critical establishment?

Very much so. I said something about many young people putting him in the mold of a science fiction guy and he shook his head and said, “I’m still pigeon-holed that way.” It was a label he chafed under.

What were the formative experiences in his youth?

[He] was deeply affected by his mother’s suicide because he saw it as a verdict that she never loved him. He suspected his older brother, Bernard, was the preferred child. I believe it’s the common denominator of a lot of people in the arts. They crave love and approval. I’m not sure Kurt ever believed that anyone loved him. As an 84-year-old man, days short of the end of his life, he told me his father had been very disappointed in him. He had the adulation of hundreds of thousands of young people yet he was a haunted, lonely man.

Vonnegut is often compared to Mark Twain. Is that apt?

Vonnegut came into his own when he wrote about his experience in Dresden in “Slaughterhouse 5.” I think that’s the book he’ll be remembered for. He talked as Vonnegut and not as a Twain redux. He dropped all pretenses out of sheer weariness. He’d been working on the book for years. That was his experience as a war-traumatized man.

Did that help him become an icon of the counterculture?

How can you resist letters from young people that say, “I read your book and I wept.” He found a visceral connection with young, confused people. I think he was emotionally stopped sometime around Dresden. There were a lot of unaddressed horrors from the war.

There’s no single aim. I deliberately make layers in a book. There’s something in there for scholars who want fresh analysis. I also want it to be for unpublished writers who want to read about a guy who started out as a freelancer, just trying to put food on the table. Success came late for Vonnegut. And, for students of human nature, I want them to get immersed in the story of another life and the vicissitudes, setbacks and mistakes Vonnegut made.

Can you boil down the author to just a few words?

Vonnegut was a disenchanted American. He believed in the American dream because his family had lived it. The proof was there. But he felt that he had missed the golden era. There was a sense he had arrived too late.