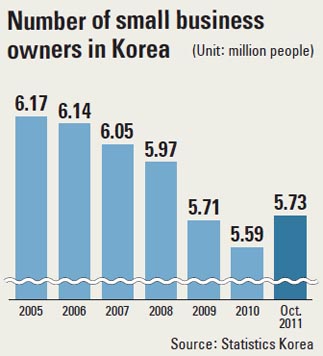 Park Seong-man, a 54-year-old retiree, had high hopes when he opened a restaurant on the outskirts of Seoul after retiring from a large retail company in 2009. But as his business failed, he lost 300 million won ($267,000) in a single year, including his retirement funds.

“I know that most restaurants are doomed to fail, but there weren’t many alternatives,” he said.

Since then, Park has been compelled to take on sorts of odd jobs with his wife to pay back debts totaling 150 million won, while also reapplying for a position at a small company.

The shocking thing is that Park is one of the lucky ones.

The number of self-employed business owners is rising for the first time in Korea in more than five years due to the rapid retirement of the country’s baby boomers. And as they venture out on their own, growing competition in saturated business areas is hurting their bottom line.

According to data from Statistics Korea, the number of people who own their own small business reached 5.73 million in October, having risen steadily since August. At the end of last year, the number stood at 5.59 million.

The recent three-month streak upsets a long-standing trend: Since May of 2006, the number of small business owners has fallen consistently.

Experts say their numbers are increasing as 7.12 million people born between 1955 and 1963 are starting to retire this year and seek out new sources of income.

“Actually, the number of small business owners aged over 50 has been steadily increasing since the middle of last year,” said Hwang Soo-kyung, a research fellow at the Korea Development Institute, a state-run think tank.

“This can be seen as a phenomenon caused by baby boomers rushing to open their own businesses after retirement.”

Although the shift has had a positive effect on the nation’s employment rate, problems that typically plague small business owners, such as over-heated competition, are flaring up again.

“Compared with the OECD average, Korea already has a high number of small business owners,” said Hwang. “The fact that their numbers are increasing is a worrying trend.”

Among Korea’s employed population, the number of nonsalaried workers including small business owners stood at 28.8 percent last year. Of the 31 OECD member countries, this was second only to Greece, for which the equivalent proportion was 35.2 percent. In advanced economies such as the United States and Germany, nonsalaried workers accounted for 8.7 percent and 11.1 percent, respectively.

Moreover, most people opening their own business in Korea flock to highly saturated sectors in the service industry, such as dining and lodging.

“With the economy facing a possible downturn right now, the increase of such small businesses must be viewed as a negative development.”

Especially as many pre-existing small businesses are already struggling. According to the state-run Korea Labor Institute, roughly 77,000 jobs in the category of self-employed businesses disappeared during the first half of this year as the companies folded.

Of this total, 59,000 were in businesses with five workers or less in five sectors: dining, lodging, wholesale or retail distribution, transportation and real estate brokerages.

Compounding the problem is the fact that large conglomerates are increasingly seeking new business models and are encroaching on areas where smaller firms tend to flock.

“Conglomerates are entering fields where self-employed businesses are concentrated, and they are having a major impact by providing specialization on a larger scale,” said Bahn Jung-ho, a researcher at KLI.

“Due to the overheated competition, small business owners are becoming increasingly impoverished.”

This is evidence to substantiate this claim. According to an analysis of this year’s household income conducted by the Bank of Korea, the Financial Supervisory Service and Statistics Korea, the average ordinary income earned by self-employed business owners this year was 50.48 million won ($45,078).

The results, which were announced last week, also showed their debt payments (principal and interest) stood at a median 10.82 million won.

“A systematic restructuring of self-employed businesses is needed,” said Kim Bok-soon, another researcher at KLI. “Too many retirees over 50 are entering livelihood-centered service industries, and are becoming insolvent.”