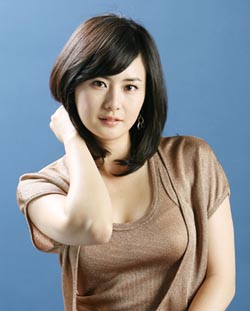 Actress Choi Jung-yoon, 34, is set to tie the knot with the son of one of Korea’s leading retail enterprises next month.

According to E-Land Group yesterday, Choi will marry the eldest son of E-Land Group Vice Chairwoman Park Sung-gyung. The wedding will be a private ceremony, with close relatives and friends in attendance.

The E-Land vice chairwoman is the younger sister of E-Land Group Chairman Park Sung-soo. E-Land Group operates dozens of local apparel and accessory brands such as Deco, Teenie Weenie, Roem, Spao and Eblin. Some of the brands have been hugely popular in neighboring China.

Choi is currently appearing in the KBS drama “Ojakko Brothers” as a reporter who falls in love with a junior colleague. She made her debut in 1996 in the SBS drama “Beautiful She.”

Her husband-to-be, known only by his surname Yoon, is four years younger than Choi. He studied economics in the United States and currently runs his own business, according to entertainment industry sources.