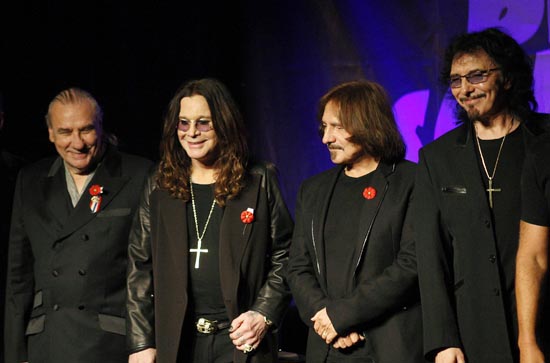 LOS ANGELES - British heavy metal legends Black Sabbath are to reunite to make a new album and tour, the original four members of the band led by Ozzy Osbourne have announced.

The group, whose hits include “Paranoid” and “Iron Man,” unveiled their plans at the legendary Whisky a Go Go club on the Sunset Strip, where they played their first Los Angeles gig four decades ago.

“We’ve tried a reunion before, and it didn’t work, but this time, for some magical reasons .?.?. we’ve written seven or eight songs and they’re really good,” Osbourne, who after musical success became a reality TV star, said Friday.

Guitarist Tony Iommi said the group’s members had always stayed in touch but it was good to be back in the band: “It’s not that we haven’t spoken for all these years. It’s been a constant thing. It’s great that we can all actually be in a room and start playing together.”

Osbourne, Iommi, bassist Geezer Butler and drummer Bill Ward, who are all now in their early 60s, wore the group’s signature black outfits at the announcement, dubbed “Reunited. 33 years in the making,” on their Web site.

The new record - their first material together since 1978’s “Never Say Die” - will be released next year through Vertigo/Universal Republic Records. At the same time they will embark on a worldwide arena tour, including headlining the Download Festival in England next June.