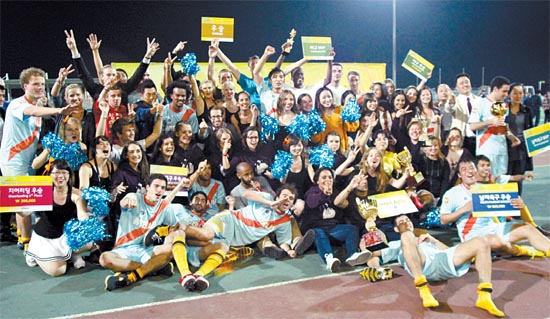 
It was neither the Olympics nor the World Cup, but some 2,000 athletes from 50 countries in Asia, Europe, Africa and the Americas gathered at the Namyangju Sports and Culture Center, Gyeonggi, Nov. 5, for the Global Family in Korea International Students Sports Festival 2011.

Sponsored by the Korean International Students Support Association (KISSA), the event is the first tournament of its scale for students to be held in Korea. Nearly 30 teams from universities all over Korea, including Ajou, Konkuk, Ewha Womans and Hanseo, participated in the events, which included men’s and women’s football, volleyball, ssireum(Korean wrestling), relay races, tug-of-war and a cheerleading contest.

There were also booths with free face painting, raffles and a performance by Korean B-boy group S-Flava crew. The festival ended with a dance party.

Inter Ajou ruled the event in almost every category, taking first in men’s and women’s football, volleyball, cheerleading and tug-of-war, as well as earning a handful of MVP awards.

Axel Fuchs, 23, is the manager and coach of the Ajou University co-ed volleyball team,

“We have a strong team because there are lots of sports facilities available on campus. And lots of team spirit,” said Fuchs, an international financial management major, originally from Germany, whose previous coaching experience was in swimming.

Though this is his first time outside of Europe, he said he was enjoying being with so many students from other countries.

“You know the great thing is, each player on our team is from a different country - Poland, Colombia, Ethiopia, Caribbean Islands, Lithuania, Netherlands, Spain, Indonesia and France,” he said as he looked out onto the court during a match against Gwangju. “We’re here to have fun but also to win.”

With 80 some athletes from Ajou University alone, the event was a reflection of the sheer number of international students residing in Korea.

The secretary general of KISSA, Youn In-tae, said that there were around 87,000 international students in Korea in 2010, a figure that is expected to hit 100,000 by next year.

“All of the students you see here are the future engineers, businessmen, IT specialists and experts in their fields ten years down the road,” Youn said. “We want to leave them with a good impression of Korea.”

He did, however, express his concerns about the discrimination that international students face, especially when trying to find a room or basic information.

“Until seven years ago, students generally didn’t come to Korea without a scholarship,” Youn said. “Things have changed since then and many students from abroad now seek to come to Korea, but Korea in some ways is not as receptive as it could be. It’s not just about being able to study here. We need to help these students get jobs and provide resources and opportunities for international students studying in Korea.”

His group is trying to remedy that. KISSA, originally the Korea International Students Association, was founded by a group of Seoul National University students in 2005 and has since expanded to help international students adjust to life in Korea and bridge the gap between the international student community and Korean society.

Youn said that sports tournaments such as this one and its 1st Annual International Students Football Tournament in June are the first steps in establishing the community. He said that KISSA also plans to set up a 24-hour, multilingual call center for international students in the future.

Meanwhile, Fahad Alahmadi, 22, a computer engineering major at Kookmin University, said he was lucky to have a support system in his fellow countrymen, as the Saudi students, many of whom are here on government scholarships, have a tight network in Korea despite attending different universities. Still, he said he appreciated events like this one.

“It’s kind of lonely being in a foreign country, so it’s great to have an event where you can talk with people from other countries and universities,” said Alahmadi, a member of the Saudi Arabian football team, KSA United.

The attention-grabbers of the day were without a doubt the pompom waving cheerleaders from the Hankuk University of Foreign Studies.

The cheering squad, organized by Ornela Akele Ondo, 22, is comprised of international students attending the university.

Originally from Gabon, Ondo attended university in France before coming to study in Korea.

“None of us have any cheerleading experience, but some of us have dance experience and we chose our own music and did our own choreography,” Ondo said.

“We had 3 weeks to practice, and we practiced every day, sometimes until midnight, after class. We got really close,” she said, pointing to six other girls in a black tees and short red skirts with a white HUFS badge sewn above the right hem.

Many of the students were taking on new challenges that day. Abdulmajeed Alquadaihi, 23, who was also on the Saudi Arabian football team, placed second in Korean wrestling, a sport he had never done.

“This is my first time ever doing ssireum. But now I get the rules,” he said. “I don’t like being in second place, so I’ll definitely watch more wrestling and learn all the rules for next time.”