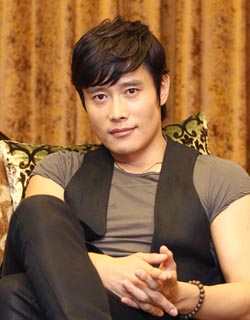 The film, “I Am the King of Joseon,” was inspired by the Mark Twain novel “The Prince and the Pauper,” but is set in the Joseon Dynasty.

Similar to the novel, the film is about two young men who look alike. In the film, the young man born into the lower class changes places with King Gwanghae, the 15th king of the Joseon Dynasty, and doesn’t want to give up his newfound position. Lee will play both characters.

Filming is set to begin early next year, according to BH Entertainment. The screenplay will be written by Hwang Jo-yeon of “Old Boy” and the film will be directed by Chu Chang-min of “Mapa Island” and “Always.”

Lee, 41, is currently in New Orleans shooting part two of “G.I. Joe,” a prequel to the 2009 Hollywood film of the same name. “G.I. Joe II” will be released next summer.

Meanwhile, Lee, known as Byonsama in Japan, where he has been immensely popular in the past years, is scheduled to tour three Japanese cities including Tokyo to meet fans in December. The number of fans is estimated at 60,000, according his agency. The last time he went on such a tour was in 2006.