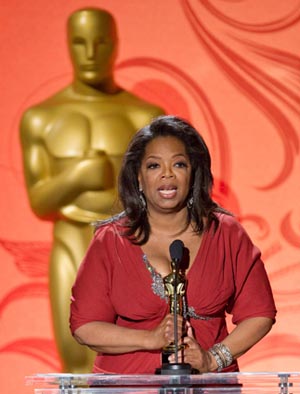 LOS ANGELES - Oprah Winfrey received an honorary Oscar for her charitable work on Saturday in what she called an unimaginable moment for a black woman who grew up poor in Mississippi and rose to the top of Hollywood stardom.

The Academy of Motion Picture Arts and Sciences annually bestows its Governors Awards on people who have made an impact in the industry. This year, the honorary Oscars went to Winfrey, actor James Earl Jones and makeup artist Dick Smith at a black-tie affair that brought out stars such as John Travolta, Glenn Close and Alec Baldwin.

Talk show host and film actress Winfrey, who was nominated for a supporting-actress Academy Award in 1985’s “The Color Purple,” was given a Jean Hersholt Humanitarian Award by a young woman who was sent through high school on a financial grant she earned from Winfrey’s foundation.

Winfrey teared up when accepting her honorary Oscar and described the moment as “unimaginable” given her humble roots growing up in Mississippi.

“All of us can make a difference through the life we lead,” Winfrey said. “We’re all here to help each other.”

She talked of her career as a TV talk show host and her movie work, and said it was “The Color Purple” that paved the way to stardom which, ultimately, led to philanthropy. That movie “door opened to me through the magic and majesty of film,” she said.

The Oscars, or Academy Awards, for the films of 2011 will be given out in a ceremony in Los Angeles on Feb. 26