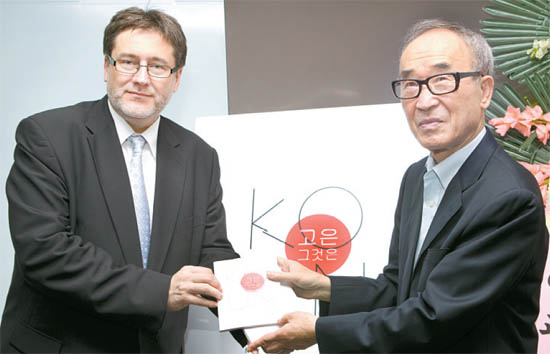 Jaroslav Olsa Jr, left, the Czech ambassador to Korea, poses with renowned Korean poet Ko Un, right, on Nov. 8 at a publication ceremony hosted by Hankuk University of Foreign Studies and sponsored by the Czech Embassy in Seoul. By Park Sang-moon


Renowned poet Ko Un, who was once nominated for the Nobel Prize in Literature, introduced the first bilingual collection of his works in Korean and Czech at a publication ceremony last week hosted by Hankuk University of Foreign Studies and sponsored by the Czech Embassy in Seoul.

One hundred copies of the limited-edition text, titled “That is,” will be released in the Czech Republic for local readers.

At the Nov. 8 ceremony held at the Korea Foundation Cultural Center in central Seoul, Ko expressed his love of Prague and his weakness for Czech literature.

“I think people who don’t love Prague don’t know how to love,” he said. “The Czech Republic is the home of some of my favorite writers. I know every poem written by [Bohemian-Austrian poet] Rainer Maria Rilke, who was born in Prague, as well as all the works of [Chilean poet] Pablo Neruda, who led modern Czech literature.”

“When I went to the Prague Writers’ Festival last year, the ambassador’s father, who is a local diplomat, gave me such a warm greeting and helped me a lot,” the poet said. “And now I have had the chance to meet the Czech ambassador, too.”

The two first met in March, when the ambassador held a publishing ceremony for a collection of Ko’s poems titled “Prague: City Loved by Writers.”

Reciting a number of his poems from his latest collection last week, including the eponymous title piece, Ko said the two countries have much in common.

“Both have suffered colonial periods, and their people both love poems,” he said.

Mentioning several major Czech translators of Korean poetry, the ambassador introduced Nam Gi-dok, who he described as “[perhaps] the first Korean who received his degree in Czech.”

“Kim received his university education in then-communist Czechslovakia in the 1950s,” the ambassador said. “While he was [there], he initiated translations of Sijo [a Korean traditional poet] from Korean into Czech. After he left the Czech Republic, we don’t know his whereabouts.”

Apart from Ko Un’s collection, the ambassador also displayed a string of poetry books at the ceremony, including the aforementioned Sijo collection.

As a former novelist and editor, Olsa has taken pains to develop cultural relations between the two countries since he was inaugurated in 2008. He held a photo exhibition of Czech photographers who visited Korea in the early 20th century, and launched an event dubbed “Month of Czech Culture in Seoul.”