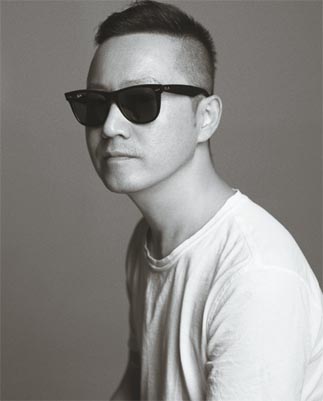 Lee Suk-tae of womenswear label Kaal E.Suktae has in the past 14 years gone through all of the twists and turns that a fashion designer might imagine.

Right after graduating from college, he garnered the top prize in a local contest for designers, went to Paris to study fashion design, worked for world-class fashion houses such as Christian Dior and Sonia Rykiel, and came back to Seoul to launch his own fashion label.

Though the business went bankrupt in the aftermath of the Asian currency crisis in the late 1990s, he soon pulled himself together and made a difficult decision to work for Korean brands and designer boutiques for a while.

Over the past two years, his collection has been capturing the attention of overseas buyers at the Tranoi fashion trade show in Paris. His collection - with its unique constructive design, quality fit and reasonable price - has attracted business from select luxury shops ranging from Seven New York in New York to Joyce in Hong Kong. And at L’eclaireur in Paris, Kaal E.Suktae is the first Korean brand to be put on sale.

Ma Chae-sook, director of cultural industry at the Seoul Metropolitan Government, which has sponsored Lee and nine other designers at the trade show as part of the Seoul’s 10 Soul project, named Lee as the most popular designer there.

“There were even moments of tension among some buyers in Hong Kong over Lee’s clothes because they all wanted his clothes,” Ma said. And sales of Lee’s collection have continued to rise across 10 countries in Asia, Europe and the Middle East.

“All the career fluctuations I have had so far seem to have made me what I am now,” Lee said in an interview at a cafe on Garosugil, a trendy district in southern Seoul, last Thursday. “In retrospect, lots of experience is significant. Having consumers open their wallets is not an easy thing. It is possible only when a designer is fully ready.”

The designer - who is more interested in creativity than “pretty” designs - is grateful for the surprisingly upbeat response from overseas. Yet there was a tinge of bitterness about his relationship with the country of his birth. He was bitter about the irony of not being as welcome here as he is abroad - largely because of what he perceives as a bias against Korean designers - but seems dedicated to changing that in the future.


Q. You have participated in Tranoi for the past two years. What has the response been like?

A. Although I debuted in Korea a long time ago, the retail distribution system did not work for me so I didn’t make much effort to push domestic sales. But I have been doing some customization for individuals and collaborating with a Web-based store. My overseas business began only when I started showcasing at Tranoi. I feel incredibly lucky because usually when a Korean designer wants to advance into markets overseas, sales and PR agencies are a must. But I made it with just two shows and without the help of the agencies. The response has been marvelous. Sales have been so good that I’ve been able to win contracts with additional suppliers. And they willingly accept my asking price. 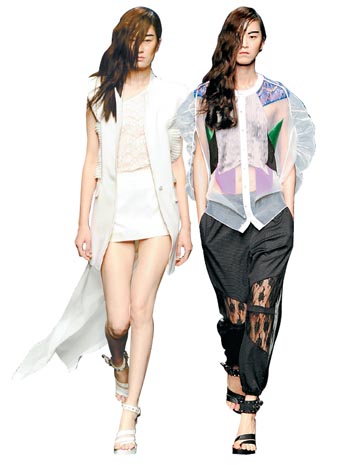 Models walk the runway at the Kaal E.Suktae show during the 2012 Spring/Summer Seoul Fashion Week on Oct. 19 at the Seoul Trade and Exhibition Center, southern Seoul. Provided by the Seoul Metropolitan Government

Your first independent label folded after four years but then you opened your atelier Prototype in 2004.

After seeing my business fail, I worked as head designer for several local brands. But I could feel that my opportunity to make a comeback as an independent designer was near. So I opened an atelier with my friend in the basement of a building on Garosugil to target markets abroad. The district at the time had many designers like me, designers who aren’t exactly mainstream but are full of artistic spirit. What was surprising was that whenever I put a few samples on sale, they sold out without exception. I could kind of foresee my potential.

What do you think was the biggest factor behind the failure of your first business?

Korea’s retail system didn’t suit me. The way that local department stores do business is different from other countries. I basically rented a space in a department store and had to pay the store a percentage of my sales. That’s why department stores constantly push tenants, including independent designers like me, to sell more. When sales lag, tenants are asked to change their designs. That means a designer can’t really be true to his or her identity.

In foreign countries, department stores buy all the clothes they want from the designer brands they accommodate. Designers don’t need to worry about low sales or inventories.

What does “Kaal” stand for?

Many people ask me that but it doesn’t really have a special meaning. I just liked the typography of the “K” and the “A.” The “L” comes from my surname.

What led you to design womenswear?

I’ve loved clothes since I was young but knew the limitations of designing menswear. Womenswear, on the other hand, embraces limitless forms of expression, and I prefer that as a creator.

Who has influenced you as a designer?

When I was a student of fashion design in the late 1980s and early 1990s, I admired Yves Saint Laurent, Thierry Mugler, Azzedine Alaia and Jean Paul Gaultier. After becoming a professional designer, I started looking more at conceptual art and architecture. I like space and constructive design. My favorite architects are Rem Koolhaas and Zaha Hadid, and I love painters like Joseph Beuys and Max Ernst. For me, saying, “Your clothes are pretty” is not a compliment. Making a pretty woman prettier is not my thing. I am always pursuing new things.

What do you usually wear?

I don’t really shop a lot. When I go shopping, the thought that I could make what I’m seeing constantly bugs me. I only buy basic T-shirts from casual American brands like Gap and some vintage items. [He was dressed in a loose, raglan-sleeved khaki safari jacket he said he bought at a vintage store.]

Government support for local designers’ forays overseas has been increasing lately. What do you think about that?

The aid has been a great help to me. But I think it’s more appropriate for private enterprises to take on this role. It’s strange that many Korean companies that are not involved in the fashion industry still consider fashion an extravagance. Fashion is such a profitable industry.

What are your long-term goals?

The high-handedness of department stores gave me such a hard time, and it is foreign buyers who have put me on the track to recovery. I’ve realized in such a short time just how big the world is, and if I just make good clothes, they can be sold anywhere. My goal is to be brought in by Korean buyers as a prestigious import brand. What is really ironic is that no Korean high-end shops like Boon The Shop have ever contacted me, though they import brands like Dries Van Noten and Martin Margiela at a hefty price. My clothes have been sold overseas at high-end shops with brands like those. Korean buyers look down on Korean brands, and I want to change that.