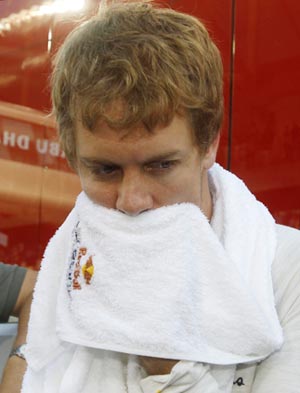 ABU DHABI, United Arab Emirates - For the first time this season, Formula One world champion Sebastian Vettel was forced to watch a race from the pits.

The 24-year-old Vettel has appeared untouchable at times this season, racking up 11 victories on the way to a second consecutive F1 title. Only once before Sunday had he failed to finish on the podium.

He was poised to add victory at the Abu Dhabi Grand Prix after he grabbed a record-tying 14th pole position of the season on the last lap of qualifying on Saturday.

But within seconds of pulling away into the lead, the right rear tire of his Red Bull car punctured. Vettel spun into the gravel at turn two and though he managed to limp back to the pits, the damage to his suspension made it impossible for him to continue.

Vettel, the dominant force of 2011, was out of the race on the first lap.

“I had a good start and I was very happy with the car up until that point,’’ Vettel said. “To lose the race there, so early on, it hurts for sure.

“There wasn’t much we could do, so after that I took the opportunity to learn a little bit on the pit wall.’’

Vettel said he was visited in his garage by Formula One Chief Executive Bernie Ecclestone, who congratulated him on his “good timing’’ with his first retirement of the season coming after he had wrapped up the title.

Vettel then watched Lewis Hamilton claim his third win of the season, a distant second behind the world champion’s 11.

“It wasn’t as exciting as being in the car,’’ Vettel said, although he did stay in the pits longer than he planned. “Initially I planned to stay only five laps, but then it turned out to be nearly the whole race.’’

With one race remaining in Brazil, Vettel can no longer tie Michael Schumacher’s record of 13 victories in a season.

Red Bull team principal Christian Horner, who grimaced and looked away from the television monitor as Vettel crashed out, had no explanation for the sudden failure of Vettel’s tire.

“Sebastian made a perfect start and had a clear lead into the first corner and then an instantaneous loss of pressure in the tire made him a complete passenger,’’ Horner said.

Vettel said he could feel something was wrong on his right side going into the second corner of the first lap.