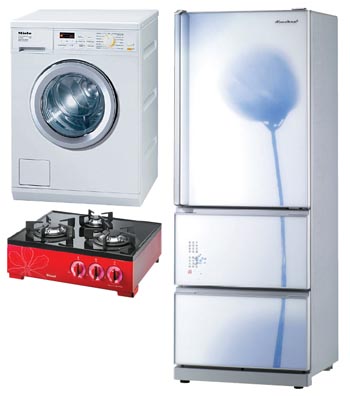 In the world of home appliance makers, one small tweak in terms of size or architecture can mean one giant leap for sales and earnings.

This was certainly the case with WiniaMando, a midsized Korean electronics company that released its first kimchi refrigerator back in 1995 under the Dimchae brand. The company now controls a leading 38.5 percent market share.

Today, eight out of 10 Korean households are known to have a kimchi refrigerator, which is designed to offer optimal conditions for the ripening, fermentation and storage of this much-loved fermented cabbage dish.

At the end of every year, housewives engage in kimchi making, called kimjang in Korean, and they treasure every little convenience or advantage their kimchi fridges can offer.

What differentiates WiniaMando’s latest product from those of its rivals is very simple: eight centimeters (3.15 inches). Unlike the standard height of 179 centimeters, it measures in at 187 centimeters.

However, it is not the height per se that matters but rather the redesigned guts of the appliance that necessitated the growth spurt. This was the result of shifting the fridge’s so-called “machine room” - including the compressor, condenser and pipes, among other parts - from the side area to the top in a way that offers more storage space and, importantly, claims to keep kimchi fresher for longer durations.

“By putting the machine room at the top, the cool air emanating from it moves downwards, while the heat generated from the process of cooling the air travels up and evaporates,” said Park Eun-gwang, a product planning director at the company.

“That way, kimchi, which is extremely sensitive to changes in temperature, can stay fresh for a longer period of time.”

“We got an idea from the architecture of high-end, luxury refrigerators overseas,” Park said. “It required us to redo our production process, but still we went ahead with it to offer consumers greater convenience.”

Rinnai, which makes gas appliances and stove ovens, found a similarly successful formula by playing with numbers - this time the number of degrees at which it angled the burner for its gas stoves.

While most companies place them 15 degrees from the surface of the stove, Rinnai chose the steeper angle of 35 degrees. This concentrates the flames inward in a way that exerts less heat on the surface, making it more energy efficient and safer to use.

“Based on our studies, we found the 35-degree angle to be the best choice for achieving the most efficient use of the flames, as well as lowering the temperature of the surface,” said an official with the company.

Similar scientific or mathematic molehills also save mountains of money in the business of laundry machines, as German manufacturer Miele discovered.

Most of its high-end domestic and commercial washing machines come with 700 holes for drainage purposes, each one measuring 2 millimeters in diameter. This number is significantly lower than the industry standard, allowing it to trim costs in the manufacturing process.

“Older models come with 4,000 holes, so we earmarked sufficient facility investment to streamline the manufacturing process,” said a Miele employee. “Such changes may not be all that evident to consumers, but we deemed the investment more than worthwhile.”

As the holes are smaller than most of its rivals, clothes rarely get stuck and the marks left on those that do are negligible, the employee added.

Meanwhile, when designing its new robot cleaner, LG Electronics found the equation to success meant adding one more camera to the two normally deployed on such devices.

This third eye significantly enhances the robot’s reading of its surroundings, the company said, claiming it is the only such cleaner of its kind with cameras fixed on the front, top and bottom of the device.

The extra camera helps it deal with tricky corners - this applies to furniture as well as ceilings and floors - and there is less chance of it recleaning the same area, a common complaint among consumers of rival products, LG said.