Lee to plead for FTA ratification at the Assembly

Lee to plead for FTA ratification at the Assembly 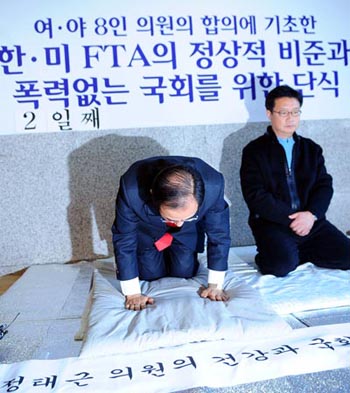 Democratic Party Representative Kim Sung-gon, left, performs 108 bows, a Buddhist practice, yesterday next to the GNP’s Jeong Tae-keun, right, who began a hunger strike Sunday morning calling for an end to the confrontation over the FTA in the lobby of the National Assembly Members’ Office Building. [YONHAP]

President Lee Myung-bak will go ahead with his plan to visit the National Assembly today to try to break the political logjam in the ratification of the Korea-U.S. free trade agreement.

But the Democratic Party continues to say it won’t meet him unless he comes with new compromises.

“If Lee comes with empty hands, he will go back with empty hands,” Representative Sohn Hak-kyu, Democratic Party chairman, warned yesterday during a meeting with senior presidential officials.

Presidential chief of staff, Yim Tae-hee, and Kim Hyo-jae, senior secretary to the president for political affairs, visited Sohn to discuss Lee’s plan to request the largest opposition party’s cooperation in the ratification of the long-pending Korus FTA. 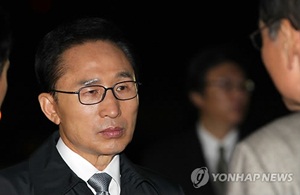 At the meeting, Sohn made clear that Lee won’t be welcomed unless he has more compromises, following major concessions by the ruling Grand National Party on Oct. 31.

He also showed skepticism that the president was trying to reach a compromise instead of preparing for the ruling party to use its majority to railroad the FTA ratification through.

“If Lee comes without a resolution for our demand to remove the ISD provision, it’s better that he doesn’t come,” Sohn said. “It will only worsen the relationship between the administration and the National Assembly.”

The ISD provision, the last remaining point of dispute between the two sides, would give foreign investors the right to bring a dispute in Korea to an international arbitration panel. The DP argues it will make Korea’s small companies vulnerable and demands its removal.

Yim tried to persuade Sohn yesterday that time is running out. The U.S. Congress approved the deal last month, and the Lee administration wants the National Assembly to act soon so the deal can take effect on Jan. 1, 2012.

Kim said the president would go ahead with his visit even if the main opposition leader refused to meet him. “We will do our best until the end,” Kim told reporters. “It’s wrong for the DP to refuse the meeting itself.”

Lee was to return to Seoul from a trip to the Asia-Pacific Economic Cooperation summit in Honolulu last night. He was to host a senior secretariat meeting at the Blue House this morning to be briefed about the final updates on the FTA standstill and planned to visit the National Assembly in the afternoon.

As of yesterday, Lee planned to visit National Assembly Speaker Park Hee-tae’s office and meet with leaders of the ruling and opposition parties.

The Democrats demanded Lee meet with U.S. President Barack Obama on the sidelines of the APEC Honolulu meeting to propose a renegotiation of the ISD provision in the FTA. Lee didn’t do so, Blue House officials said.

“It’s absurd for the president to raise an issue about the FTA that was already approved at the U.S. Congress,” a presidential aide said. “Talking about it at APEC was also unreasonable.”

The Grand Nationals continued to pressure the Democrats. “Lee should be welcomed on a visit to the legislature,” Representative Hong Joon-pyo, GNP chairman, said yesterday at a GNP leadership meeting. “The DP must not protest it.”

“If there is no progress after Lee’s visit, and if the conflicts and scuffles worsen instead,” Nam said, “then I think the moment to make a decision will come.” That was a reference to the GNP using its majority to push the ratification through, which would touch off violent melees in the Assembly.

For most of the year, the ruling party has strenuously tried to avoid violence, which has become political poison with the public.

While the leadership of the rival parties are at polar opposites, junior lawmakers are making moves to end the deadlock. Grand National Representative Jeong Tae-keun began a hunger strike Sunday morning calling for the Assembly to end the confrontation.

“I saw hope in the courageous decision announced Thursday by eight ruling and opposition lawmakers,” Jeong said. “I completely agree with them and I have begun a hunger strike to seek support from the people and fellow lawmakers.”

Kim performed 108 bows, a traditional Buddhist practice, next to Jeong in the lobby of the National Assembly Members’ Office Building to pray for his health and peace in the legislature.

While Kim was kneeling for his 108 deep bows, Jeong closed his eyes. After Kim finished, the two lawmakers hugged each other.