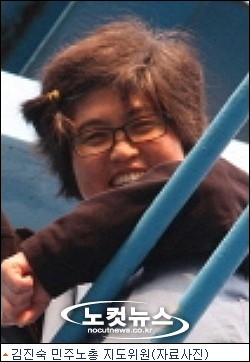 Kim, 50, ended on Thursday her 309-day sit-in protest on top of a crane inside the shipyard of Hanjin Heavy Industries after the labor union came to an agreement with management.

Prosecutors, who have charged Kim with obstructing business and trespassing, sought a warrant to detain Kim for questioning on Friday.

The Busan District Court, however, dismissed the request, saying that Kim did not pose a flight risk because she came down from the crane peacefully and because she has admitted to her charges. It also said that Kim needed time to recover her health from her long protest.

The court also dismissed requests for warrants to detain three other protestors who were accused of leading the strike over the shipbuilder’s decision to lay off 400 workers.

“There is no doubt that Kim is accountable in leading the long-term strike,” Judge Nam Seong-woo of the court said. “But we considered the fact that Kim peacefully came down from the crane following a labor-management agreement and that Hanjin’s management submitted a petition pleading for leniency.”

Prosecutors said they would refile for a warrant soon because it was clear that Kim had violated the law.