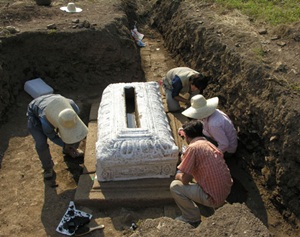 A group of South Korean historians and cultural artifact experts traveled to North Korea yesterday to conduct a joint safety survey of the site of an ancient royal palace in the communist state, officials said.

The visit was to follow up on a meeting held in North Korea on Oct. 28 between historians of the two Koreas where they agreed to a quick resumption of a long-stalled inter-Korean project to excavate the site.

The two Koreas launched the project to uncover the remains of Manwoldae, the royal palace of the Goryeo Dynasty (918-1392), in the North Korean border town of Kaesong in 2007. But the South halted it last year as part of its sanctions against Pyongyang for the March sinking of the Cheonan.

After visiting the site on their latest trip, the South Korean delegates concluded that emergency measures were needed to better preserve the site because it had suffered serious flood damage in the summer.

During their 10-day stay in Kaesong, the South Koreans will conduct a safety survey and take necessary safety measures on the site with their North Korean counterparts, according to Seoul officials.

Based on the results of the survey, joint excavation work may begin on Nov. 24 for a month, they said.

Kaesong served as the capital for most of the Goryeo Dynasty. It is now home to an industrial complex run by both Koreas.