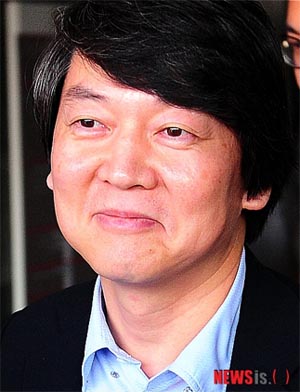 "I plan to use about half of my shares of AhnLab for the society," Ahn Cheol-soo said in an e-mail announcement to employees of AhnLab.

Ahn, who set up the country's No. 1 anti-virus software firm, expressed hope that his donation will be used to give dreams and hope to the youth of low-income families who are deprived of opportunities due to social and economic inequality.

Education is widely seen as the key to success in the competitive Korean society. Graduates of the most prestigious colleges still have great advantage in getting the best jobs in Korea, where people's occupations are closely linked to their social status.

Ahn, who currently serves as chairman of the company's board of directors, said he did not have any other purpose for his donation, describing it as "Noblesse oblige."

The announcement came amid rampant speculation on whether Ahn will run in next year's presidential election. President Lee Myung-bak's five-year single term ends in February 2013. He is barred by law from seeking re-election.

Ahn, the former medical doctor is widely popular, especially among young Koreans, due largely to his clean and upright image.

He withdrew his bid for the Seoul mayoralty in last month's by-election, although he was leading opinion polls. He instead backed Park Won-soon, a liberal lawyer-turned-activist, who was elected Seoul mayor.

Some other Korean politicians have pledged similar donations in recent years.

In April, Chung Mong-joon, a lawmaker of the ruling Grand National Party, said he would establish a scholarship foundation worth 300 billion won for the children of low-income families.

Chung, the biggest shareholder of the world's largest shipyard, Hyundai Heavy Industries, is also seen as a possible presidential contender.

In 2009, President Lee donated the bulk of his lifetime savings of more than 33.2 billion won to establish a foundation that offers scholarships and other financial support to those in the lower income brackets.