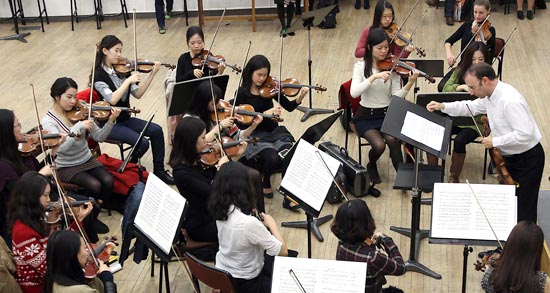 
To mark the 50th anniversary of Korea and Australia’s diplomatic relationship, the Sydney Symphony Orchestra is visiting Seoul and will be holding a two-day concert at the Seoul Arts Center from today.

Meanwhile, 13 top members of the Sydney Symphony Orchestra held a mini concert together with undergraduates of Seoul National University’s College of Music yesterday afternoon, under the baton of Vladimir Ashkenazy, principal conductor of the Sydney Symphony Orchestra. Before the concert, the 13 leaders of each instrumental part visited the school in the morning to hold a “Master Class at SNU,” in which the members met with the music students of SNU to provide lessons before the mini concert.

According to the Australian Embassy, the “Master Class at SNU” was organized as the eminent Russian-born conductor Ashkenazy said he wanted to have an opportunity to “meet with music talents of Korea before the concert at the SAC.”