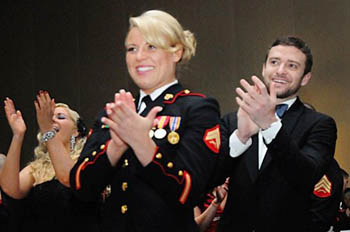 WASHINGTON - Singer-turned-actor Justin Timberlake made good on his promise to accompany a female corporal to a U.S. Marine Corps ball after she invited him on YouTube and says he was “moved” by the experience.

The Hollywoood star said on his Web site he was honored and “stoked to be there” with Corporal Kelsey DeSantis, a blonde martial arts competitor who asked Timberlake to Saturday’s event in Richmond, Virginia.

“I knew I would have an evening that I wouldn’t forget ... something I could tell my friends about. What I didn’t know was how moved I would be by the whole experience,” Timberlake wrote on his Web site.

Timberlake said he came away humbled by the dedication of the Marines and enjoyed talking to his date about her passion for training in mixed martial arts.

He said they managed to dance a little and that DeSantis kept asking him if he was having a good time.

DeSantis, who can be seen in an online video pummeling her bloodied opponent in the ring before being declared the winner in a recent bout, said in a tweet that “the ball was epic! Had a wonderful time.”

The young marine had issued her video invite after a fellow marine asked Timberlake’s co-star in “Friends with Benefits,” Mila Kunis, to another Marine Corps ball.