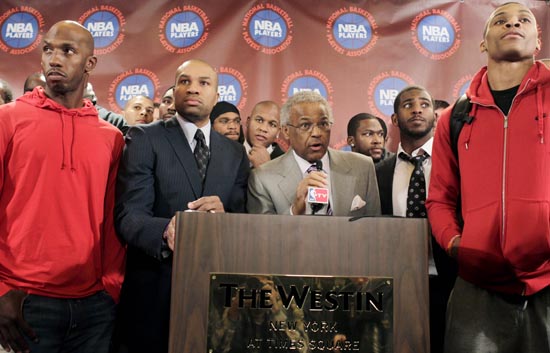 “We’re prepared to file this antitrust action against the NBA,’’ union executive director Billy Hunter said. “That’s the best situation where players can get their due process.’’

And that’s a tragedy as far as NBA Commissioner David Stern is concerned.

“It looks like the 2011-12 season is really in jeopardy,’’ Stern said in an interview on the ESPN network. “It’s just a big charade. To do it now, the union is ratcheting up I guess to see if they can scare the NBA owners or something. That’s not happening.’’

Hunter said players were not prepared to agree to Stern’s ultimatum to accept the current proposal or face a worse one, saying they thought it was “extremely unfair.’’ And they’re aware what this battle might cost them.

But it’s risky. The league already has filed a pre-emptive lawsuit seeking to prove the lockout is legal and contends that without a union that collectively bargained them, the players’ guaranteed contracts could legally be voided.

During oral arguments on Nov. 2, the NBA asked U.S. District Judge Paul Gardephe to decide the legality of its lockout, but he was reluctant to wade into the league’s labor mess. Gardephe has yet to issue a ruling.

Stern, who is a lawyer, had urged players to take the deal on the table, saying it’s the best the NBA could offer and advised that decertification is not a winning strategy.

Players ignored that warning, choosing instead to dissolve its union, giving them a chance to win several billion dollars in triple damages in an antitrust lawsuit.

“This is the best decision for the players,’’ Derek Fisher, union president, said. “I want to reiterate that point, that a lot of individual players have a lot of things personally at stake in terms of their careers and where they stand. And right now they feel it’s important - we all feel it’s important to all our players, not just the ones in this room, but our entire group - that we not only try to get a deal done for today but for the body of NBA players that will come into this league over the next decade and beyond.’’

Fisher, flanked at a press conference by dozens of players including Kobe Bryant and Carmelo Anthony, said the decision was unanimous. But there were surely players throughout the league who would have preferred union leadership put the proposal to a vote of the full membership instead.

Hunter said the NBPA was in the process of converting to a trade association and that all players will be represented in a class-action suit against the NBA by attorneys Jeffrey Kessler and David Boies - who were on opposite sides of the NFL labor dispute earlier this year, Kessler working for the players, Boies for the league.

“The fact that the two biggest legal adversaries in the NFL players dispute over the NFL lockout both agree that the NBA lockout is now illegal and subject to triple damages speaks for itself,’’ Kessler said in an e-mail to The Associated Press. “I am delighted to work together with David Boies on behalf of the NBA players.’’

Stern was not impressed with his legal adversaries.

“Mr. Kessler got his way, and we’re about to go into the nuclear winter of the NBA,’’ he told ESPN. “If I were a player ... I would be wondering what it is that Billy Hunter just did.’’

The sides still can negotiate during the legal process, so players didn’t want to write off the season just yet.

“I don’t want to make any assumptions,’’ union VP Keyon Dooling said. “I believe we’ll continue to try to get a deal done or let this process play out. I don’t know what to expect from this process.’’