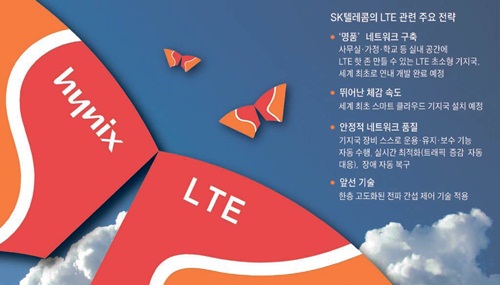 SK Telecom will expand its embryonic but high-speed LTE (Long Term Evolution) network from Seoul and several satellite cities to the rest of the nation in April, the country’s largest mobile carrier announced yesterday.

The company, which controls more than half of the domestic market, originally planned to roll out the fourth-generation (4G) wireless communications technology in 2013. It decided to bring the date forward by eight months due to stronger-than-expected consumer interest, according to SK executives.

“The LTE service has caught on quickly among consumers,” said Kwon Hyuk-sang, head of the company’s network division.

The carrier has secured 260,000 LTE service subscribers since it launched the commercial service in July.

But it expects this number to pass 700,000 by year’s end as it welcomes 15,000 new converts each day, or roughly one in three new subscribers.

“We will make efforts to ensure these subscribers can enjoy the new service quickly and conveniently,” explained Jang Dong-hyeon, head of the carrier’s marketing unit.

As the global mobile industry is in transitions from 3G to 4G, many mobile carriers are betting on LTE over other types of emerging technologies.

In Korea, LTE is gaining traction despite the fact that a lack of infrastructure supporting the system means users often get automatically connected to a 3G service.

SK Telecom estimates that by January, 70 percent of its smartphone users will be using the LTE service to download movies, surf the Internet and run mobile applications. It believes the figure will soar to 95 percent by December 2012.

Other domestic firms also have their eyes on LTE, which offers data-transmission speeds of around five times faster than the current rate.

LG U+, Korea’s smallest mobile carrier, said its 4G LTE network will become available in 82 cities before next month.

The carrier, which is gambling on LTE to raise its profile, rolled out the high-speed data service in major cities in July.

KT, the country’s No.1 mobile carrier, said it will launch a similar service in the capital this month or next, pending regulatory approval.

To set itself apart, SK Telecom introduced its LTE network technology under the PETA brand yesterday. Peta is a unit equivalent to 1,000 trillion bytes, an obvious reference to the explosive rise in data traffic around the world.

With processing speeds of up to 100 megabytes per second, 4G services allow users to go places that 3G simply cannot handle, or at least in nowhere near the same time. This is especially the case for high-quality multimedia support such as HDTV and 3-D video streaming and network games.