On the sunny afternoon of Halloween, a sales clerk at the Nature Republic Myeongdong World branch was aggressively promoting a limited-time offer: cosmetics at a 50 percent discount 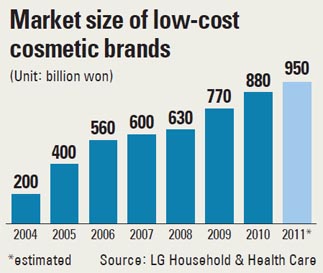 Attention shoppers: Cosmetics are going for peanuts in Myeong-dong, central Seoul, one of the most popular destinations for local and foreign shoppers, and it may not be a limited offer at all.

Despite notorious high rents in the area, Nature Republic is among an slew of cosmetic shops battling it out in Myeong-dong through aggressive price cutting.

Among the 58 ground-level shops on Jungangno, 18 are low-cost cosmetic brands such as Missha, The Face Shop, Nature Republic and Etude House.

All 18 cosmetics shops are offering discounts or giveaways to get customers to open their wallets.

“If competitors start selling at bargain prices, we have to follow suit,” said a sales clerk at Baviphat, another cosmetic brand. “In this industry, you won’t survive if you fall behind for a moment.”

Baviphat opened its first store in Myeong-dong in 2006.

“Because we’re a latecomer with low-brand recognition, we have to be very aggressive in low-price competition,” the clerk said.

The low-cost cosmetics market, which was only worth 200 billion won in 2004, has grown into a an estimated 1 trillion won industry this year, according to industry sources.

There are currently 20 low-priced Korean cosmetics brands, including the two top players in the country, pioneers Missha and The Face Shop. Industry sources said that the price war began in 2007 when the market became saturated and growth slowed.

Missha, the first low-priced cosmetics brand, designated every 10th of the month as Missha Day, selling products at discounts.

It also runs a Missha Big Sale with discounts up to 50 percent for 15 days in July and December each per year.

“Competition intensified to a new level after latecomers poured into the low-priced cosmetics market,” said Heo Seong-min, an official on Missha’s marketing team.

“This has weakened the leadership of the pioneers of this industry and even forced market leaders like us to take a low-price strategy.”

Everyone has been forced to join the war, including the nation’s largest brand, The Face Shop. It started offering its first discounts, a buy-one-get-one-free deal every month, last December.

And Myeong-dong is where the competition is fiercest, and the discounting most aggressive. “The current discounts aren’t normal at all,” an industry official who asked not to be named said. “It shows how keen the competition is.”