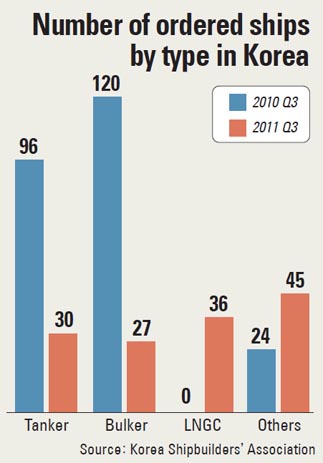 Korean shipbuilders are centering their business portfolios on LNG carriers as demand continues to grow for cheaper energy alternatives to oil.

As the price of oil creeps up amid an economic downturn and slumping shipments, former cash cows like oil tankers, bulk carriers and container carriers are giving way to other revenue streams, such as drill ships and transporters of liquefied natural gas.

In fact, Korea now has a vice-like grip on the global LNG carrier industry, with four of its shipbuilders winning 40 of a total 45 orders this year, according to industry figures.

No. 1 Hyundai Heavy Industries said the three former favorite types of vessels only accounted for one-third of its $18.2 billion in total orders as of October, while LNG carriers and drill ships took up the remainder.

“We received orders for 10 LNG carriers and 11 drill ships this year,” said Kim Kwang-kug of Hyundai Heavy Industries. “The combined order value of these stands at $8.1 billion, higher than $5.9 billion taken up by tankers, bulk carriers and container carriers.”

He said drill-ship orders are expected to remain strong as oil prices continue their upward trajectory.

“Major players in the oil-drilling industry are eager to drill in deeper waters,” he said, adding that “demand for LNG carriers will also keep going up as global demand for natural gas grows.”

The industry also anticipates a growth spurt in demand for floating gas or oil-production facilities, he said.

An LNG carrier liquefies natural gas at minus 163 degrees Celsius to decrease volume to 1/600th of the original, meaning that vessels of this type require sophisticated technology and skills to assemble.

Korean shipbuilders have an overwhelming edge in this market over their Chinese rivals, market researchers said.

Meanwhile, Samsung Heavy Industries, the country’s No. 2, has won 17 orders for LNG carriers so far this year - more even than Hyundai.

“Samsung Heavy has a very clear competitive edge in the field of high-value-added shipbuilding, such as LNG carriers and drill ships,” the company said. “Those vessels account for as much as 81 percent of our current order backlogs.”

Industry sources said events may have conspired in their favor.

“Especially demand from Japan [for natural gas] spiked after the Fukushima nuclear explosion in March, as the country switched to LNG and other forms of clean energy,” said Yim Sun-ah from the Korea Shipbuilders’ Association.

“The short supply of LNG carriers last year caused market demand for the vessels to increase,” she added.

Korean shipmakers won a total of 11 orders for such vessels from January to September last year, but this number jumped to 45 in the space of 12 months, according to data from the association. To keep pace with the times, Korea’s big-four shipbuilders are ramping up efforts to build more made-in-Korea LNG carriers.

“Japan is the world’s largest LNG importer. As long as Japan continues to import LNG from distant countries like Australia and Qatar, demand will keep going up along with orders for carriers,” said Kim Hyun, an analyst with Shinhan Investment.

Global energy firms typically avoid buying transporters of LNG as they find it more economical to make long-term leases, Kim said. “But as demand for natural gas has shot up, the rental fees for these carriers has jumped from $30,000 a day to $125,000,” he said. “This has sparked an increase in orders [for purchases].”