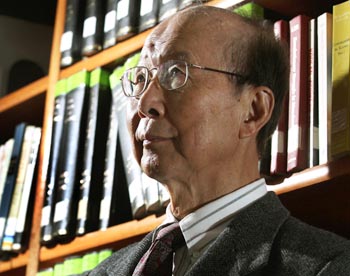 Lee Chong-sik, Professor emeritus of political science at the University of Pennsylvania

Many Koreans think that the division of the Korean Peninsula originates from a single decision made at the 1945 Moscow Agreement that began the trusteeship governance of the area - with the South led by the United States and the North by the Soviet Union.

According to Lee Chong-sik, professor emeritus of political science at the University of Pennsylvania, however, the agreement just reflected a larger historical turn of events involving the surrounding powers that ultimately tore the country apart and led to the 1950-53 Korean War, which technically remains unresolved as the fighting ended in an armistice.

Lee, speaking in an interview with the JoongAng Ilbo on Nov. 6, said China’s internal power struggle in the region then known as Manchuria was another missing piece of the puzzle that helps explain how the peninsula came to be divided.

The interview was held three days before the 80-year-old Lee started a four-part series of lectures on Korea’s modern history at Kyung Hee University in Seoul, where he also holds a chair professorship. He said many Korean researchers neglect the content of confidential documents revealed by the Soviets after the end of the cold war, such as one showing that Stalin secretly ordered a government to be set up in North Korea under its control in 1945.

Lee said North Korea was designed by Stalin to be a red state as a rear base for China’s communization beginning as early as October 1945, two months before the Moscow Conference was held. “Korean society is full of misplaced faith in modern Korean history,” he said.

Lee was the first Korean student of Robert Scalapino, the famed Asia expert who died on Nov. 2 at the age of 92. After studying politics at the University of California, Los Angeles, Lee ended up co-authoring the book “Communism in Korea,” with Scalapino.

Lee was born in 1931 in Anju, Pyongan, a region now under North Korea’s control. He moved to Manchuria in 1933, relocated to the North in 1948, and escaped to the South in January 1951 during the early stages of the Korean War. Before the war ended, he emigrated to the United States with the aid of American military officers and Christian missionaries. Here are some excerpts from the interview.


Q. How did you team up with Scalapino?

A. After finishing my undergraduate and graduate courses at UCLA with a major in politics, I was looking for another university to start my doctoral program and I got a letter from the professor, who said he planned to study communism in the countries in the East and asked me to be his assistant. Soon after that, I enrolled in the doctoral program at Berkeley and became one of his students. That’s when I started taking Korea’s modern history as my major interest.

The London Conference is not as well known as those held at Yalta or Potsdam. What is its relevance for Korea?

This was a venue where the foreign ministers of the Allied forces that won World War II - the United States, United Kingdom and Soviet Union - discussed how to divide the spoils of war. No Korea experts took much of an interest in the conference, because the country was not mentioned at the meeting. Of course, history textbooks don’t mention anything about the conference. People mostly think that the trilateral foreign ministers’ meeting held in Moscow in December 1945 decided Korea’s fate.

Earlier than that, however, another trilateral meeting was held in London from Sept. 12 to Oct. 2 of 1945, and that made a decisive impact on the future of the Korean Peninsula.

Why do you say it was decisive?

Because relations between the United States and the Soviets deteriorated after the London conference. Before that, they were on lukewarm terms .?.?. but their ties froze up in London. We could describe this as the de facto onset of the cold war.

What were the main points of contention?

The Soviets wanted the northern part of Hokkaido in Japan after the war, but the United States refused to agree. But what really enraged Russia was the refusal by the U.K. and the U.S. of its demand to take over Tripoli in Libya. The records of the London Conference show that then-Foreign Minister Vyacheslav Molotov asserted Russia’s need for a port in the Mediterranean for its commercial vessels. He said it was for the country’s commercial vessels, but evidently the Soviet Navy wanted to have a base through which to expand its forces around the world.

What did this mean for Korea?

After Molotov disputed the port issue with his U.S. and British counterparts on Sept. 15-16, Soviet policies regarding the Korean Peninsula and China were completely changed. On Sept. 20, Stalin made a secret order to set up a “democratic government” in North Korea.

At the time, I was living in Manchuria - now known as the three northeastern provinces of China - so I can still remember what happened. In Manchuria, the Chinese Communist Party engaged in a fierce civil war with Chiang Kai-shek’s Nationalist Party. By August 1945, Stalin had decided that the Communists could not win. As such, he encouraged them to stop fighting while he sought ways of forming a secret alliance with the Kuomintang.

Did China’s civil war spill over into North Korean territory?

North Korea was turned into a rear base for the Chinese Communist Party from May 1946 at the order of Stalin, and the North became involved in China’s internal war. Just as Manchuria was off-limits to U.S. forces during the Korean War, North Korea, between May 1946 and 1948, was a sort of a holy place that could not be trespassed on by the national party. The Communist troops were reorganized in the North and trained by Soviet forces. Due to Stalin’s desire to use the region as a rear base for China’s Communist Party, the division of the Korean Peninsula seems to have been inevitable.

Were the U.S. forces aware of the situation?

The U.S. forces intelligence unit was tracking the movement of China’s Communist Party troops in North Korea. Through eye-witness accounts by evacuees and other intelligence sources, they learned that the party was already spread across the North, as well as how they were being trained and their basic movements.

So Stalin had full control over Manchuria and North Korea from 1945 to 1948?

Right. Stalin served as de facto czar of the entire Communist bloc. He provided for, or exploited, the North - which the Soviets had sovereignty over at the time - as he saw fit.

However, we have not been able to clearly see the influence of the Manchurian situation on the North until now. We have to recast Korea’s modern history from the perspectives of international history. The political situation after liberation was swayed by invisible hands, and Korea’s history textbooks explain little about this.

The riddle of the division of the Korean Peninsula can be solved through [an understanding of] the changes in Soviet policies towards the outside world.