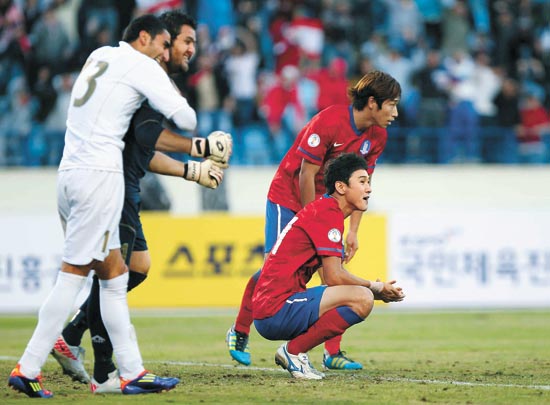 Korean footballers Lee Jung-soo, crouched, and Lee Keun-ho react after their 2-1 defeat to Lebanon in the third round of the Asian qualifier for the 2014 FIFA World Cup on Tuesday at Sports City Stadium in Beirut, Lebanon. [YONHAP]


Coach Cho Kwang-rae is in the hot seat after the Korea men’s football team suffered a shocking 2-1 loss to Lebanon in the third round of the Asian qualifiers of the 2014 FIFA World Cup on Tuesday.

At the Sports City stadium in Beirut, the national team was stunned by Lebanon, whose FIFA ranking is 115 places below Korea. Koreans were expecting a similar victory to two months ago when it thrashed the same Lebanon team 6-0 at home, but on Tuesday everything went wrong.

Lebanon got the opening goal just five minutes after the kickoff when defender Ali Al-Saadi scored from close range after Roda Antar missed a free kick from the edge of the penalty area.

The Taeguk Warriors came back in the 20th minute with Koo Ja-cheol’s penalty kick making the score 1-1, but the tie didn’t last as Abbas Atwi also converted a penalty in the 30th to help the host retain the lead.

Cho made some tactical changes in the second half by putting in Sunderland striker Ji Dong-won, Valenciennes winger Nam Tae-hee and Gyeongnam FC playmaker Yoon Bitgaram, but none of them could turn it around for troubled Korea.

It was Korea’s first loss against Lebanon in its football history, after marking six wins and one draw in their previous seven encounters.

“I wanted to present a better game, but the pitch condition was just poor,” Cho said at the post-game news conference. “We lost a lot of key players and our young players didn’t impress.”

However, Cho’s comment angered fans even more and some rushed to the official Web site of the Korea Football Association (KFA) and posted messages urging KFA to dismiss the 57-year-old coach.

“When would a workman stop blaming his tools?” one fan named Park Se-woong posted on the KFA Web site. “You can concede goals and lose a game, but our performance was just poor. How can you explain that?”

Some fans even said they should start a petition to fire Cho, saying “the national team that once gave us joy turned into a nightmare under Cho’s management.”

Football pundits pointed out that Cho has been relying too much on players based overseas and frequent change of players’ positions has finally backfired on the team. But despite the loss, Korea still remained on top of Group B with 10 points after three wins, one draw and one loss, followed by Lebanon, who also has 10 points but trail on goal difference.

The team still has a chance to advance to the final round of Asian qualifiers if it collects a win or draw against Kuwait at home on February 29, next year. But a loss for Korea and a victory for Lebanon against the UAE would end Korea’s journey to the 2014 World Cup.