Swimmer Thorpe gets back in the pool this year

Swimmer Thorpe gets back in the pool this year 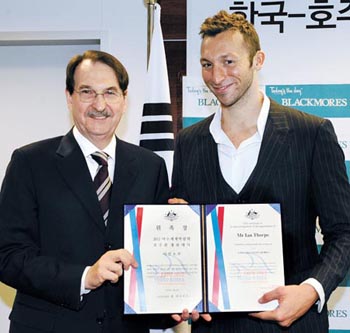 Ian Thorpe, right, holds a certificate with Australian ambassador Sam Gerovich after he was appointed as Australia’s goodwill ambassador for Expo 2012 Yeosu Korea, yesterday, at the Australian Embassy in Seoul. [NEWSIS]

Australian swimmer Ian Thorpe said yesterday he’s trying to stay positive through a recent string of slow performances as he gears up for the London Olympics next year.

In Seoul to mark 50 years of diplomatic ties between Korea and Australia, Thorpe said he harbors no illusions about his current form on his comeback trail.

“I am not disappointed at all,” Thorpe said of his November meets in Singapore, Beijing and Tokyo, where he failed to reach the podium in any race. “I expected when I first raced, it wouldn’t be that fast. It’s pretty natural for anyone who spent any time out of the pool.”

Thorpe, 29, returned to competitive swimming this year after retiring in 2006. The five-time Olympic gold medalist likened his comeback attempt to starting a car after having had it off for five years.

“It doesn’t matter how good the car is, it’s still going to be difficult to start and I am experiencing this,” Thorpe said. “There are some things I think I am better at, and some things I need to improve on. But most importantly, I’ve rediscovered love and passion for my sport. I don’t think I can underestimate the value of that as I continue my preparation.”

In his heyday, Thorpe was one of the world’s most accomplished swimmers. He won three gold medals at the 2000 Sydney Olympics and added two more titles at the 2004 Athens Games. Nicknamed “Thorpedo” for his bursts of speed, he also has 11 world championships to his credit and has set 13 world records.

But during his five-year hiatus from the pool, other young swimmers have emerged to take the throne, including Korean freestyler Park Tae-hwan, an Olympic gold medalist and a two-time world champion in 400-meter freestyle. Thorpe said he is only focused on himself and his own preparations but added he is looking forward to competing against youngsters.

“We’ve seen incredible progression in swimming and what’s fascinating about this progression is that it’s from all over the world,” the swimmer said. “We’ve seen the standard being raised in recent years. I look forward to that challenge, competing with some of these competitors who’ve done so well.”

Thorpe is eyeing a spot at the 2012 London Olympics, with the Australian Olympic trials looming in March next year. He acknowledged that it will not be an easy task given the length of his break from the pool, but added his preparations will take care of the job.

“When I compare myself to how I used to swim 2005 or 2006, technically I am swimming better,” Thorpe said. “I have to do a lot more training with that technique. I am not someone who focuses on trying to be No. 1. I focus on what I can do and focus on making sure my preparation is as good as possible.”