DRAWING FOR A WHILE 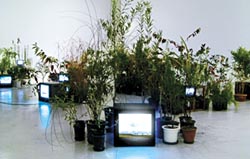 To Dec. 6: This is a solo exhibition of Korean artist U Sun-ok, also a professor at Ewha Womans University.

The artist is known for abstract compositions that showcase a distinctly Korean interpretation of the void. “Drawing for a While” comprises installations, drawings and video works that follow this same ideal.

One of the works in the exhibition, “We are All Passengers,” is set up at the entrance. It portrays the artist’s meditative thoughts on our short-lived, fleeting lives and shows that she is merely “drawing for a while.”

U Sun-ok’s works focus on the nonexistent and intangible, seen as a passing moment in certain conditions and environments.

This is alluded to in “Moon Walk,” a video that depicts the artist being followed endlessly by the moon throughout her daily life. 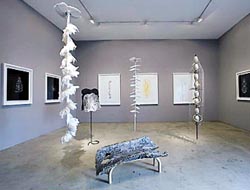 To Dec. 16: This exhibition features the work of established Korean artist Minouk Lim in two parts.

Part I is presented in the form of screenings and videos that are made into a single loop in the screening room of the first floor of the gallery. Through these videos, Lim comments on the social, economic and political disorder of modern Korea within its accelerated and frenetic climb toward globalization.

In utilizing a diverse array of materials that are typically unused and discarded in today’s society, Lim alludes to the possibility of alternative modes of experience.

For example, “M Alone” is designed as hand-knitted hemp cords. Created in the image of an ascending monumental tower heading toward an ideal future, it also appears to be dragged and weighed down by a troubled history.

To Jan. 29, 2012: This exhibition features about 110 paintings by hwawon, or court painters, who were responsible for the production of paintings for the state as employees of Dohwaseo, the state bureau of painting in the Joseon Dynasty (1392-1910). According to Leeum, it is the first exhibition dedicated to the hwawon, who were given a low social status despite their important role and the popularity of their work.

The show is divided into two sections. The first features paintings that hwawon created for the court and royal household. Included are documentary paintings showing court events and ceremonies, portraits of kings and high-ranking officials and decorative paintings such as peony paintings for screens used at royal weddings. The highlight of the section is “Royal Palanquin Procession,” a nearly 10-meter-long painting depicting a procession of King Gojong and his family in the late 19th century.

The second section features paintings created by hwawon for private patrons, including noblemen and wealthy aristocrats. The section includes paintings of Taoist immortals by Kim Hong-do (1745-after 1806), who is regarded as one of the greatest old masters in Korean art history. 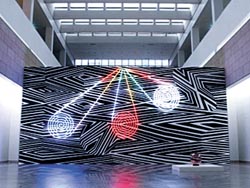 To Feb. 19: This show arrives in Korea after having opened in a Sydney suburb this summer.

According to the museums, the show was inspired by Korean-born video art pioneer Paik Nam-june’s 1976 visit to Sydney and the 1976 Sydney Biennale, in which some Korean artists including minimalist Lee Ufan participated.