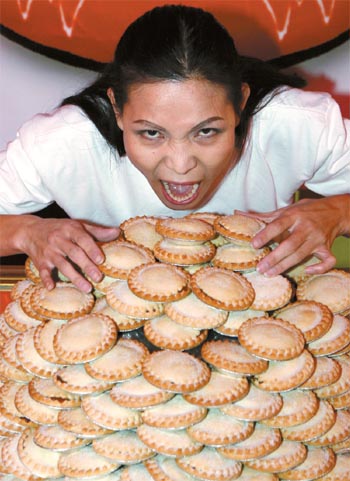 Competitive eater Sonya Thomas is currently ranked sixth in the world and has 29 world titles under her belt. At Nathan’s annual Fourth of July hot dog eating contest on Coney Island in New York, she ate 40 hot dogs in 10 minutes. [GETTY IMAGES]

What can you do in 10 minutes? In that amount of time, competitive eater Sonya Thomas could throw back 552 oysters, 29 pork barbecue sandwiches or nine and a half large boxes of popcorn. Give her 12 minutes and she could gobble up 53 Taco Bell soft shell tacos, 32.5 ears of sweet corn or 44 soft shell Maine lobsters.

Nicknamed “The Black Widow” for her ability to devour her male counterparts in competition, Thomas is currently ranked sixth in the world and has 29 world titles under her belt, including first place in Nathan’s annual Fourth of July hot dog eating contest on Coney Island in New York, where she ate 40 hot dogs in 10 minutes.

Though she defines competitive eating as a sport, Thomas says she doesn’t practice much.

“Eating is my hobby,” she said. “Do people practice their hobbies?”

Yet she does have two distinct advantages over her rivals - a large stomach capacity and fast hands.

“Competitive eating has more to do with mental fortitude than physical fitness,” she said.

Training her mind is a practice she’s continued throughout her life.

Thomas, who is now 45, was born Lee Sun-kyung in Gunsan, North Jeolla, and grew up in a poor family. Before emigrating to the United States in 1997 at the age of 30, she spent time in Seoul, working during the day and studying hotel management at night. She said she had hoped to find a position at a hotel, but when she couldn’t, she moved to the U.S.

“I really had to start over in America. From getting a driver’s license to finding a job, nothing was easy,” she said.

She even applied for a job as a flight attendant but was told to come back when her English was better.

The change she had been looking for appeared one night in 2002, when she was watching television and saw world champion eater Takeru Kobayashi put down 50 hotdogs in 12 minutes to win Nathan’s famous hot dog eating contest.

“I’ve always loved eating, and seeing a Japanese person winning got me thinking, ‘I could do that,’ ” she said.

Now a champion eater herself, Thomas earned her most recent title at the Wing Fest in Buffalo, New York, when she set a new national record by demolishing 183 buffalo wings in 12 minutes.

Meanwhile, when not reigning as the queen of speed eating, she works as a fast food queen. She is currently the branch manager at the Burger King on Andrews Air Force Base in Maryland.

The JoongAng Ilbo sat down with Thomas last month to talk about eating, her life in the States and where all that food goes. The following are excerpts from the interview:


Q. How did you come up with your nickname “The Black Widow?” 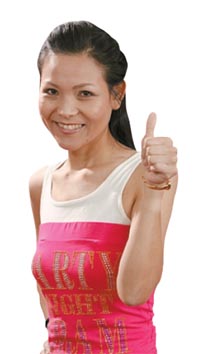 A. All competitive eaters have a nickname. There’s Rich “The Locust” LeFevre and Tim “Eater X” Janus. I came up with mine after talking with my friends. When I started, most contestants were male and my goal was to beat them. “The Black Widow” was a reference to my ability to defeat men who were bigger than me. I was almost the number one competitive eater until 2006.

Have you always liked eating?

Certainly. People have told me I was a good eater since I was young. Some say they eat to live, but I live to eat. Eating is my pleasure in life.

Even now, I can’t think of anything better than the food my mother prepares when I go back Gunsan.

You have such a small figure: Where does all that food go?

I have a large stomach capacity. Since I started working at Burger King, I’ve had to eat at odd times. I’d work for 12 hours straight, not wanting to keep customers waiting. Then I’d eat one meal a day, and in the process, I’d drink liters and liters of water. I think that’s when my stomach stretched.

You don’t seem to gain weight, even after eating so much.

I have a high metabolism. In America, I’ve always walked to work to save money. Some days, I work for 12-15 hours without a break, which is like walking 70 hours per week. When I go home, I work out again. I eat about 5,000 calories a day, but I also burn as much. When I’m competing in a contest, I gain five to six kilograms, but I get back to normal after about a week.

What’s the key to eating a lot in a limited time?

I have fast hands. One trick is to make yourself burp by drinking water during the event, which allows you to swallow faster. Competitive eating has more to do with mental fortitude than physical fitness. It’s all about focusing and keeping pace within the assigned time.

How often do you practice?

Eating is my hobby. Do people practice their hobbies?

In which events do you have the most confidence?

My main events are oysters, jalapenos, buffalo wings and boiled eggs. Sandwiches and hotdogs don’t suit me well. No matter how hard I try, I always end up in second or third place. I don’t like bizarre foods such as frog’s legs or cow brains either.

Are there people who look down on eating contests?

Of course. Some people ask if we’re playing with our food or say we look stupid.

But I think eating contests are similar to entertainment or sports. The contest determines how much a person can eat in a limited amount of time and the winner feels the pleasure of triumph. I mean, who can eat 68 hotdogs in 10 minutes? It’s a skill worth praising. Besides, everyone is interested in eating. I enjoy eating, too. That’s that.

You must have a lot of fans in the States.

People recognize me when I’m at Burger King. When they first see me, they scream out, “Oh my god!” Mostly it’s because I’m smaller than they thought. People usually ask for my autograph or request photos, but I also often get e-mail encouraging and congratulating me. Not long ago, a teacher asked me to give a lecture to motivate their students. Interest from kids is the best of all.

What made you leave Korea?

I was working as a typist during the day and going to college at night, majoring in hotel management, and I had to postpone my education. I applied to a lot of hotels in Seoul, but they all turned me down because they said I was too old. At the time I was 25, 26, but they were looking for 20, 21-year-olds. I had been trained at the Hyatt Hotel and was confident about my abilities, but the rejection really hurt my pride. Around that time I got married to an American man, and we left for the States. I wanted to start over.

How was life there at first?

I don’t want to say much about my marriage because it didn’t last. I really had to start over in America. From getting a driver’s license to finding a job, nothing was easy. I applied for a position as a flight attendant but was rejected because of my English. I interviewed at several restaurants, but the response was always “Improve your English and come back.”

How did you come to work at Burger King?

I heard they were looking for someone to work at a Burger King on the base, so I applied. When they turned me down because I didn’t have any experience, I went to a nearby Burger King and insisted they give me a position. I was hired and worked 12 hours a day with no breaks. After two months, I applied again to the one on base and was hired. I’ve been there ever since.

What things have changed for you since you started participating in eating competitions?

For me, it’s just eating contests and work. I rarely have time for myself. People call me a workaholic because I work 15 hours a day. I don’t date either. Men say I’m selfish, but I cherish my life. I also have a strong sense of self. I do think about others, but I don’t like asking for help.

Are you satisfied with your life?

To tell you the truth, there are some things I’d like to change. I can’t live my life the way I want forever. I’d like to take it down a notch, to have more time for myself and others.

What is the most important thing in life for you?

My health. Being sick not only keeps me from working, it also hurts my co-workers.

My dream is to buy a house in the States and open my own Burger King.

What makes you continue to participate in eating contests?

It makes me feel alive. Eating is really important.

[Slight hesitation] Pride. I want to be proud of my life as a Korean woman.