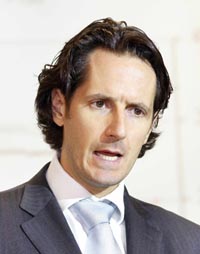 Korea’s persistent inflation woes are partly driven by external influences such as a fast-growing China, thereby limiting local policy makers’ options in terms of how to tamp it down, a top regional economist from HSBC said yesterday.

The U.K.-based multinational bank believes Korea’s economy is heading for a slowdown but will not enter a recession, with various major economic indexes better positioned than they were prior to the 2008 financial crisis.

Meanwhile, positive U.S. economic data and signs of continued economic growth in China led HSBC to predict that a significant economic downturn will be largely confined to Europe, ruling out a worldwide double-dip recession.

The Korean economy is putting the brakes on growth, but a recession is unlikely due to the country’s strong fundamentals in both trade and finance, according to Hong Kong-based Frederic Neumann, co-head of HSBC’s Asian economic research department.

“Korea is going into a slowdown, but it’s not comparable to 2008 at all,” said Neumann, who visited Korea yesterday to present the bank’s short-term forecasts.

It gave cause for optimism by presenting a purchasing managers’ index (PMI), compiled by Markit. This showed that, despite export orders for Korean goods having declined this year as the months rolled on, the drop off was significantly smaller than that seen in 2008.

The comparative resilience of exports this year can be partly attributed to the ascendancy of China as a major importer of Asian goods.

According to data by CEIC, which provides financial databases, Korea’s monthly exports to China have exceeded its combined shipments to Europe and the U.S. since mid-2009, thus limiting the fallout of a drop in demand from those regions.

According to Neumann, Korea’s controlled exposure to lending by the European banks also hold it in good stead.

Unlike the rest of Asia, which is chronically indebted to European banks to the tune of at least $1.5 trillion, up from $1.1 trillion in early 2009, Korea reduced its borrowing to $180 billion as of June, down from $240 billion in early 2008. “For Korea, [exposure to European banks] was a challenge in 2008, when it had considerable external debt which came under pressure after Lehman Brothers collapsed,” said Neumann. “But now Korea has very little financial risk from potential deleveraging from European banks.”

Neumann said the country’s financial market is much healthier now due to a solid trade surplus that ran to $4.1 billion as of October.

“Compare that to before the 2008 financial crisis, when Korea ran a trade deficit,” he said. “Corporate funding positions and loan-to-deposit ratios are also good.”

He dismissed talk of a hard landing for the Chinese economy, given that it was recently buoyed by positive data in retail and car sales, raw material imports and industrial production. The economist said China will continue to grow as large-scale public housing projects provide fiscal stimulus.

Although some of the data seemed to indicate that the U.S. economy is heading for recovery - especially the data pertaining to rising import demand and resilient consumer spending growth - HSBC’s forecast for Europe was bleak.