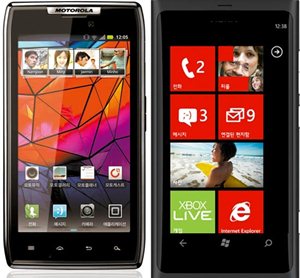 Samsung Electronics cites its Amoled displays as one of the main reasons for the explosive success of the company’s Galaxy smartphones.

But what is all the fuss about?

Led by Samsung, smartphones and small display platforms like tablet PCs are slowly transitioning over to Amoled, a next-generation display technology that facilitates ultra-thin screens, in what could herald a swan song for LCD displays.

While liquid crystal displays helped revolutionize the TV industry - where they are still dominant - by consigning bulky cathode ray tubes to the trash can of history, LCDs themselves may soon look like dinosaurs as Amoled takes over. 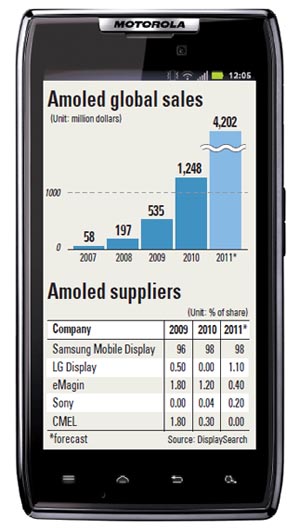 Today, some of the newest smartphones by Samsung, Nokia and Motorola have made the switch and are touting Amoled as the next big thing.

“Display of your dreams”

Last year, when Samsung released its Galaxy S and Apple dropped the iPhone 4 onto the Korean market, some insiders dubbed the competition “Amoled vs. Retina,” referring to their respective display technologies.

And Samsung, the world’s No.1 smartphone maker as of the most recent quarter, seemed almost as keen on highlighting the superiority of its new displays as it was on hyping its lineup of slick-looking smartphones.

The company began rolling out Amoled four years ago and has since released upgraded versions such as Super Amoled plus and Super Amoled HD.

“The concept pre-dated 2007, but due to the extreme difficulty of developing these screens it only existed as a tagline called ‘the display of your dreams,’?” said Jeon Eun-seon, a spokesperson for Samsung Mobile Display, a joint venture launched in 2009 by Samsung Electronics and Samsung SDI.

Demand was fueled in part by the blistering success of its Galaxy S smartphone, which sold more than 10 million units since its debut last year, while the Galaxy S II reached sales of 20 million in less than six months since its debut in April.

Initially, other handset makers were hesitant about adopting the technology for their devices because it was developed by Samsung, a strong rival.

But today things have changed.

Samsung Mobile Display, which recently released a 7-inch high-definition Amoled, says that the new display “has become something of a fad in the smartphone field.”

Overseas handset makers like Nokia, Motorola and Dell, as well as homegrown brand Pantech, are also showing their support.

Nokia, the world’s leading manufacturer of mobile phones, adopted a 3.7-inch Amoled screen for its latest smartphone, the Lumia 800. The Finnish company slipped to No.3 in the smartphone business after Samsung and Apple but is desperate to reclaim its top spot.

U.S. handset maker Motorola also chose a 4.3-inch Amoled screen for its latest smartphone, the Droid Razr, the first smartphone it has rolled out since it was acquired by Google earlier this year.

Joining the bandwagon is U.S. personal computer maker Dell, which recently announced its entry to the fierce yet profitable smartphone market. The company has adopted a 4.3-inch Amoled screen for its Streak Pro model that is slated to be released in January. Meanwhile, Pantech, the No. 3 player in the domestic market for cell phones, is also a fan.

“Amoled has emerged as the mainstream device for smartphones,” Park Byeong-yeop, founder and CEO of Pantech Group, told reporters in October. “We plan to place more orders for the display next year.”

The mad rush to go Amoled seems to have been inspired by a number of factors, including problems that have now been resolved. Formerly, supply shortages amid soaring demand resulted in an inflated price tag that put phone makers off, observers say.