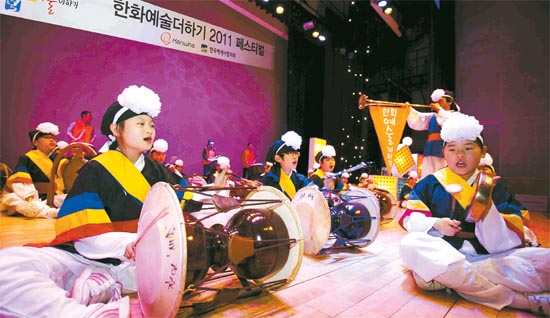 Children dressed in traditional samulnori costumes perform at Seoul Women’s Plaza last month to show off three years of hard work under the auspices of Hanwha’s Art Plus mecenat program. Provided by the company


After years of hard work, about 900 children from 45 childcare centers across the country gathered in Seoul last month to play musical instruments and draw pictures as part of the Hanwha Art Plus Program, which was set up in 2009.

Supported by Hanwha Group-owned Korea Life Insurance, this program is typical of the kind of corporate social responsibility activity put together by the Korea Mecenat Association, which was founded in 1994.

Since then, business investments in culture and the arts have increased markedly.

“From 2006 through 2011, a total of 348 companies and art organizations have been matched up through the association’s art and business program,” said Kim Yun-mi, who works at the association. “The businesses have provided about 20 billion won [$17.64 million] in support funds for their art partners.”

Mecenat has since become a byword for all kinds of arts, cultural and sports activities supported by companies for the public interest, with vulnerable classes such as the disabled, ethnic minorities and low-income families the main targets.

The term originated from Gaius Clinius Maecenas, a politician in ancient Rome who served as a patron of the arts. It was later picked up by U.S. companies and has since gone global.

Now local firms are rushing to show their charitable side and ride a growing wave of interest in humanitarian pursuits across the country. In particular, the financial industry has been targeted for criticism by the public for its huge profit-taking at a time of financial uncertainty and is making moves to channel some profits back into society.

In addition to Korea Life Insurance, SK Telecom has supported art organizations with their marketing activities, CJ Group has organized musical concerts, and steelmaker Posco has invested in cultural infrastructure, including concert halls and an art museum.

“Businesses involved in mecenat activities are fulfilling their responsibility to society. The government fully supports this,” said Park In-joo, chief of the presidential office for social integration at the Blue House.

Korea Life Insurance’s efforts were credited yesterday at the 2011 Mecenat Awards, held at the Westin Chosun hotel in central Seoul. The company picked up the top prize at the ceremony, which ran under the theme of “Art is the answer for creative business innovation.”

“We believe that a combination of economic and cultural development drives a country’s overall growth,” said Park Young-joo, chairman of the Korea Mecenat Association. “Mecenat activities among Korean businesses will ensure our society grows in a healthy way.”

Last year, Korea Life Insurance held more than 1,000 events on the theme of cultural education, including art camps. The events were for children from low-income families who showed talent but could not afford to attend expensive art-related activities.

Korea Life launched its Hanwha Art Plus scheme with an investment of 2.4 billion won.

“The ultimate goal is to help children take the initiative in terms of their creativity and [their interest in] the arts.”

The Hanwha program provides children with 20 lessons a year, or two a month, in subjects such as theater, art and music. The first year focuses on basic knowledge, while the second year lets them develop and hone their skills on specific musical instruments, such as the cello and flute, among other options.

“Korea Life Insurance has been helping improve children’s emotional health,” the company said. “We have thrown music concerts for homemakers, held concert tours across the nation and sponsored theater shows to raise public awareness of the importance of mental well-being.”

At yesterday’s annual awards ceremony, the prize for best cultural contribution was granted to Hana Financial Group, which has been disseminating musical knowledge through a series of concerts and its Hana Classic Academy. It also produced a show to teach kids more about the economy, sponsored the Seoul City Orchestra and ran a number of public contests to encourage young designers.

Shinhan Card, which each year provides scholarships to talented students from poor families, won the prize for cultural management. The company also runs ecofriendly libraries and holds a Picasso drawing festival for kids each May.