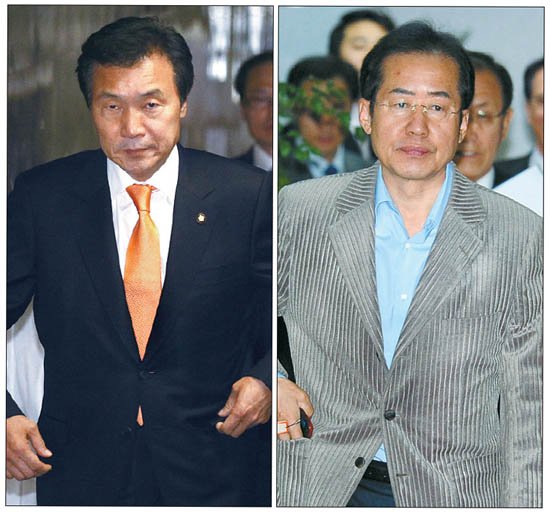 Left: Sohn Hak-kyu, chairman of the Democratic Party, walks out of a party caucus yesterday where DP lawmakers discussed how to respond to President Lee Myung-bak’s compromise for the ratification of the Korea-U.S. FTA. By Choi Seung-shik
Right: Hong Joon-pyo, chairman of the Grand National Party, enters a party leaders’ meeting on the FTA yesterday. [NEWSIS]

The ruling Grand National Party is now making preparations to push the bill through the National Assembly with its majority.

The largest opposition party made an almost impossible counterproposal to the Blue House yesterday, saying it wants a written agreement with the United States, signed by officials higher than the minister level, promising immediate negotiations on the investor-state dispute settlement (ISD) provision of the FTA.

“The president’s verbal promise cannot be reason enough for us to change our official position,” Representative Lee Yong-sup, DP spokesman, said yesterday after a DP lawmakers’ caucus. “It is the DP’s official stance that the ISD provision must be removed from the FTA.”

The Democrats yesterday held a meeting for five and a half hours and discussed the offer made by President Lee to their chairman, Representative Sohn Hak-kyu, on Tuesday.

Lee said that if the National Assembly ratified the FTA with a recommendation for the governments of Korea and the United States to renegotiate the ISD provision, Seoul will demand the renegotiation to Washington within three months after the pact takes effect.

“It remains unchanged that the FTA should be approved after renegotiation and that the ISD must be removed,” Sohn said yesterday.

The DP’s decision threw cold water on the Blue House’s attempt to reach a compromise to ratify the deal. The U.S. Congress already approved the FTA last month.

“The president has done everything he can,” said Park Jeong-ha, presidential spokesman. “The ball is in the National Assembly’s court. I hope the lawmakers show that representative democracy is still alive.”

He, however, did not respond to speculation that the Blue House was pushing for a floor vote, which it could win with the GNP’s majority in the Assembly. That would probably lead to a violent melee between ruling and minority representatives, which the GNP is trying to avoid.

Following Lee’s appeal to the Democrats Tuesday, Washington confirmed it was willing to discuss the ISD provision once the FTA takes effect.

An official from the Office of the United States Trade Representative said Washington is prepared to consult with Seoul on any issues after the agreement goes into force. The official also said the joint committee on service and investment, to be established after the FTA takes effect, will address any issue in areas including the ISD provision. Korean Trade Minister Kim Jong-hoon and his American counterpart Ron Kirk agreed at the end of last month in an exchange of letters to form the committee.

The GNP said it will hold a lawmakers’ caucus today to address the situation, but hardliners said yesterday the time has come for the ruling party to use its majority to approve the long-pending trade pact.

“The DP’s demand is an insult to the president,” said Representative Kim Gi-hyeon, GNP spokesman.

The GNP also began preparing its lawmakers for possible confrontation with opposition parties at the National Assembly. Asked if the ruling party will use its majority to push through the FTA, Representative Kim Jeong-kweon, the GNP’s secretary general, said, “We have to begin preparation.”

Representative Hong Joon-pyo, chairman of the GNP, has stepped up efforts to make sure his lawmakers will show up for a voting if the party decides to use its majority.

Of the 169 GNP lawmakers, 93 are first-term representatives, and many of them have publicly said they will not cooperate with any attempt to push through a bill that will invite violent resistance from the opposition.

The ratification of the FTA requires a majority of the incumbent 295 lawmakers - at least 148 - to participate in the voting, and the majority of them must support it. A plenary session is scheduled for Nov. 24, but it remains to be seen if the GNP will be able to corral enough lawmakers to vote. About 50 lawmakers, mostly first-term members, have signed a compromise with the DP foreswearing violence over the FTA.