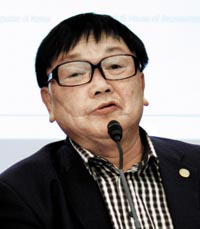 WASHINGTON - For years, Oh Kil-nam, 69, has been on a campaign to rescue his wife and two daughters from a North Korean prison camp.

On Monday, the South Korean went to Capitol Hill in Washington to make a special appeal at the eighth general meeting of the International Parliamentarians’ Coalition for North Korean Refugees and Human Rights.

“I believe my family is still alive,” Oh told the gathered legislators from South Korea, the United States, Japan, Canada, Cameroon and Poland. “If not, there is no reason for me to continue living.” 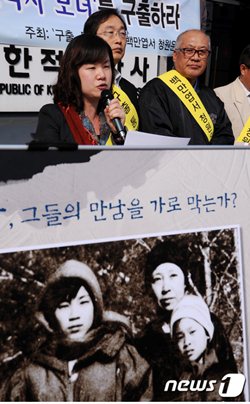 “I pray that my wife and daughter are alive, and I can hug them closely and cry - cry tears that are not of a beast but of a human,” Oh said.

In 1985, Oh and his family defected to North Korea from Germany, where Oh had been studying for a doctorate in economics. He was convinced to defect, he says, by composer Yun I-sang and Song Du-yul, professor of philosophy at University of Munster, both South Koreans who became German citizens and were later prosecuted in the South for their pro-North activities.

The family was brainwashed for three months upon arriving in North Korea, Oh says. When he received an overseas mission in Germany the following year, Oh escaped to South Korea and did not return.

His wife, Shin Suk-ja, and their two daughters were sent to Yodok concentration camp in South Hamgyong Province, a prison known for its harsh treatment of its political prisoners, in 1987.

In a documentary of Oh’s story that was screened before his appeal, he declares, “I was a fool,” for leading his family to North Korea.

Over the years, Oh and the residents of Tongyeong, Shin’s hometown in South Gyeongsang, as well as civic groups and lawmakers have campaigned for the release of the “daughter of Tongyeong,” Shin, and her two daughters, Oh Hye-won, 35, and Oh Gyu-won, 33.

“Do all of you believe my daughters are alive? I believe so. Please believe [with me],” Oh implored in a feeble and trembling voice.

Oh clings to hopes that his family is alive through news brought by defectors who had escaped from Yodok concentration camp and also through a few old family pictures sent by Yun I-sang, a Tongyeong native who had directed him to Pyongyang in the first place and passed away in 1995.

On Capitol Hill, Oh held up a picture from 1985 of his two daughters playing the violin in Germany.

“I want to wipe the tears of my family, who probably sheds tears with their gaunt bodies, who must be so fragile, alone and unaided, with my own hands.”

Oh is scheduled to meet with human rights representatives from the U.S. State Department today, and on Nov. 18, he is to visit the United Nations in New York City to submit a petition with 160,000 signatures formally requesting the UN to aid in the rescue of his wife and daughters.