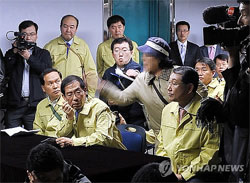 Police charged the woman for assault and interfering with a government official’s duty.

The mayor had told police after the incident that he did not want to press charges, but police said they were seeking a warrant because she has been involved in multiple assaults against politicians.

Mayor Park was watching a civil defense drill at 2:15 p.m. on Tuesday with his aides at City Hall Station, when the woman abruptly entered the area and struck the mayor’s neck, yelling, “You red [communist]! Step down as mayor! You’re a lap dog of [late President] Kim Dae-jung!”

Police said the woman was currently on trial for assaulting Chun’s aide.