Art as panacea in time of worldwide crisis

Art as panacea in time of worldwide crisis 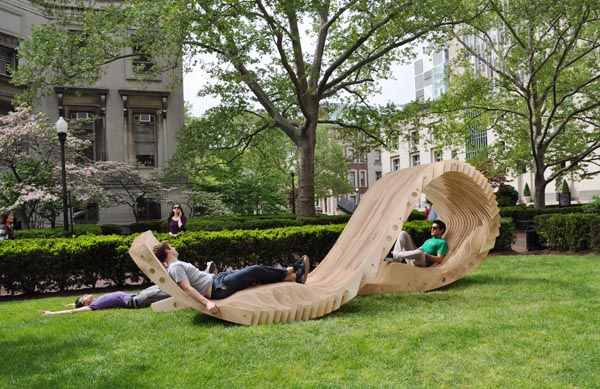 The installation “Visual Permeability Pavilion,” which people can climb and rest upon, is featured at the Artgate Gallery in New York City. Created by architects Kang Eun-ki, Kim Da-yeon and Lee Jeeun, the work provides a respite from urban hustle and bustle. Provided by the IM


“We are living in a time of crisis” is not an uncommon phrase today, as it is often heard on the news, the Internet and from our parents and loved ones. Crisis talk is everywhere as we think about how we ended up on this current path.

The exhibition, which started yesterday at the Artgate Gallery, covers an explicit range of modern issues, including: environment, energy, economy, agriculture, ideology, the third world and many others that have been packaged into the visual medium of design and architecture.

The Institute of Multidisciplinarity for Art, Architecture and Design, a nonprofit group consisting of Korean artists and designers in New York, is hosting the exhibition. It has been made possible through funding from the Ministry of Knowledge Economy and the Korea Institute of Design Promotion.

“We are confronting too much [uncertainty] these days, from impacting individuals’ lives to threatening great achievements of human civilization, and leading us to anxiety and frustration for the future,” said Choi Chang-hak, the commissioner and curator of the exhibition.

Choi himself is joining in as one of them, with a residential project named “Reciprocal Architecture II,” which provides a new housing design paradigm. It raises the question of conflict between home ownership and the economic crisis in New York City.

Several of the artists worked as a team. For instance, architects Kang Eun-ki, Kim Da-yeon and Lee Jeeun produced a meditative and interactive exhibit called the “Visual Permeability Pavilion,” which people can climb onto and relax on. It provides a brief getaway from the hustle and bustle of the city, placing into question the separation between the physical and the psychological.

Lee Sang-hwa and An Jee-yong of Manifesto Architecture also collaborated on a work of art that reinterprets the idea of the traditional bike rack with the “Bike Hanger” project in an abandoned urban plot. They developed a space-saving, vertical bike rack where people can load their bikes at street level and have them stored overhead.

Creative technology artist Syn Sue-gyeong has her own composition called “Immortal Dreams” in the form of a wearable, interactive wing-pattern design, intended to cause the viewer to brood over the current generation’s “clipped wings,” or clipped dreams, encouraging them to dream once more and take flight.

Wearing the wing pattern, when one flaps his or her arms the wings lift up and flap as well; if one’s arms are lowered, the wings fall back into place. Syn’s piece is meant to note the suppressed freedom of dreams that has caused today’s depressed and slowed development.

“Everyone struggles and makes great efforts to overcome the so-called crisis [but] a question remains: what is the substance of crises?” Choi said.

“We are standing on the line of unstable reality and incoming changes that we are unable to define.” The “[global] Crisis & Design ver.1.0: Living in the Crisis Era” exhibition artists attempt to define just that.