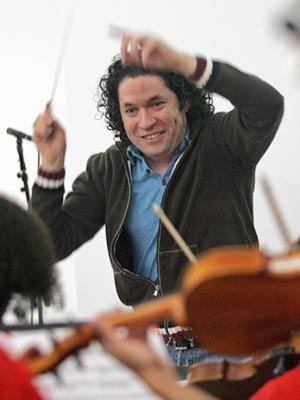 LOS ANGELES - Gustavo Dudamel stands off to the side of an orchestra of T-shirt clad teens as they laboriously rehearse Brahms’ Hungarian Dance No. 5. He’s listening, not just with his ears, but also with irrepressible fingers that tap and pluck the air as if he’s actually conducting the piece.

At the end, he hops on to the conductor’s podium and, beaming at his rapt pupils, demonstrates that the difference between playing music and performing it is passion.

“Be wild, like the pop music,” the music director of the Los Angeles Philharmonic exhorts as he pantomimes a spirited sweep of a violin bow as the kids chuckle. “I know, I am always a pain for all the orchestras.”

Dudamel’s ebullient style of conducting, which sends his long dark curls bouncing as he gestures, has made him the rock star of the classical realm. He flits among concert halls on three continents and runs on a schedule that allots time down to 10-minute segments, but reserves an occasional Saturday morning to coach children in a program that brings Beethoven to the barrios.

It was the original program in his native Venezuela, El Sistema, that discovered his own musical talent at age 10.

With Dudamel at the forefront, Los Angeles has emerged as the national flagship of the U.S. version of the System, El Sistema U.S.A, which in just four years has grown to encompass programs in more than 50 cities.

Under the aegis of the Philharmonic, Los Angeles has the biggest Venezuelan-inspired initiative, enrolling some 500 mostly minority children in two neighborhoods where music is more likely to mean hip-hop than Hayden.

Next year the Philharmonic is stepping up its commitment by launching a teaching center to train instructors in the distinctive El Sistema method, which provides intensive musical training that enhances children’s self-esteem.

The initiative, which also includes adding a third neighborhood program somewhere in Los Angeles County in 2013, has now become part of the Philharmonic’s mission, said Deborah Borda, president and chief executive of the Los Angeles Philharmonic.

It is perhaps only fitting that Los Angeles has taken the baton, since Dudamel is the dynamo behind El Sistema’s global expansion and its star graduate. He is also one of more than 400,000 mostly underprivileged children who have received free music lessons in Venezuela.

“My main goal, and it’s a big one, is that every child has a chance to get close to music, as a right, as they have access to food, health, education, they get the chance to have art and culture, especially music,” Dudamel said