What to eat after a night of drinking

What to eat after a night of drinking 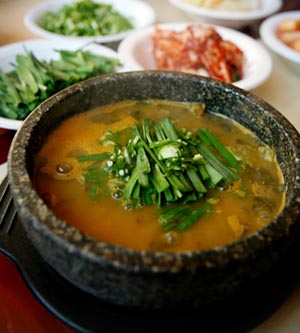 Korea is one of the countries known for its drinking culture. With soju and makgeolli (rice beer) readily available, Koreans have plenty of options for hard drinking, but they are still prone to hangovers the next day.

Every country seems to have its own concoction for conquering a hangover. Russians drink cucumber or sour pickle juice and Germans eat pickled herring. Koreans typically go with a class of hot soups known as haejangguk. In Korean, haejang means “detoxify” while guk translates to “soup.”

Though some say that almost any hot soup can be called haejangguk if it is consumed after alcohol, experts say that some soups are better than others at expelling toxins. Doctors say that haejangguk helps alleviate a hangover because the spice in the soup revs up the metabolism and pushes the alcohol out through the sweat glands.

Haejangguk recipes vary by region. One of the most famous varieties is the kongnamulguk (bean sprout soup) from Jeonju, North Jeolla, which is made with a light seafood broth, bean sprouts, egg and seaweed. Bean sprouts help rid the body of acetaldehyde, a chemical that causes hangovers.

After a night out, Seoulites often go looking for Yangpyeong or Cheongjin-dong haejangguk. Both the city in Gyeonggi Province and the neighborhood in Jongno District have become synonymous with the soup.

The origins of haejangguk are not clear. Some say it dates back to the Goryeo Dynasty (918-1392), while others believe that today’s haejangguk was created in the 1800s in port cities like Incheon, where beef bones and intestines were salvaged for soup.

Although some Koreans also drink haejangsul (sul is alcohol) to relieve a hangover, it’s not a common remedy. Instead, Koreans tend to consume energy drinks made by pharmaceutical or beverage companies. The market for these beverages has grown in recent years and is estimated to be worth around 150 billion won ($132 million).