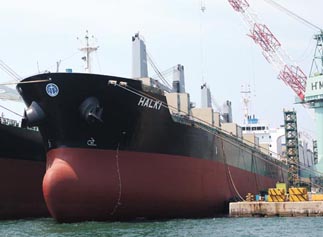 Hyundai Heavy Industries and Daewoo Shipbuilding and Marine Engineering have been joined by Fincantieri of Italy as the final candidates to export the naval ships to Britain, according to the Defense Acquisition Program Administration.

“The preferred bidder is scheduled to be selected around December or January next year,” a DAPA official said.

Meanwhile, Hyundai Mipo Dockyard’s 37,000-ton bulk carrier HALKI was named as one of the Significant Ships of 2011 by The Naval Architect, a British journal that specializes in the international marine industry.