With much at stake, Internet search engines are battling for a bigger chunk of the mobile search business and, as usual, Google is getting the most attention.

The U.S. search giant controls more than 80 percent of the world market for online searches, but its visibility on Korean desktops makes it more akin to a minnow in storm-swept waters. 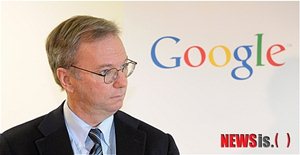 In fact, since it entered the country in 2007, Google has played the less familiar role of an underdog, only garnering a market share of around 2 percent in the face of formidable domestic rivals such as Naver and Daum.

This is something it is moving to address given the lucrative nature of cell phone advertising, which the industry estimates will be worth as much as 530 billion won ($469 million) next year.

As people start to perform as many searches on their smartphones and tablets as they do on their laptops and desktop PCs, the search business is being realigned with the mobile element placed in the foreground.

For Google, it could be the perfect time to again try its hand at winning over Korean netizens.

Simplicity and neatness are Google’s key advantages in the mobile search business, and this quickly becomes apparent when the Google app is opened on a smartphone.

The basic design of a logo and a search box is a marked contrast to the Naver app, which also offers news headlines, photos and other services.

But Google officials work based on the logic that less is more. And with the company’s research team claiming to now own 20 percent of Korea’s mobile search market, this may not be far off the mark.

According to industry sources, Eric Schmidt, Google’s executive chairman, stressed the importance of this business segment to Google Korea officials during his visit to Seoul early this month and promised his full support.

In September, it invited 300 major advertisers from around the country and showed them the various ways in which they could place ads on its mobile service.

Google has also been aggressively introducing new services within its mobile search operation. Having come to the conclusion that 20 percent of mobile searches are now conducted via voice-activated commands, it has made a mobile voice search available in 14 different languages, including Korean.

One of its more popular creations is the Transit Navigation app. A component of the latest version of Google Maps, this personal navigator delivers constantly updated information on public transport in 400 cities around the globe.

The main obstacles to greater market access, however, are Naver and Daum - which are also both ramping up their mobile initiatives.

The two dominate the domestic search engine industry, with Naver owning 73 percent of the advertising revenue and Daum controlling 18 percent. Together, they have a stranglehold on a business calculated to be worth in excess of 1 trillion won.

Naver’s strength is its rich content, which includes an extensive list of computer games courtesy of Hangame, its sister company.

In fact, the brand has so entrenched itself among the public consciousness that its green logo is easy for most Koreans to recognize. Now Naver simply has to migrate this solid customer base over to mobile Internet usage.

“Our daily sales from mobile search ads recently rose to 120 million won. At this pace, we think we should hit sales of around 30 billion won this year,” said Won Yoon-sik, a Naver spokesperson.

Cloud computing allows files and software to be viewed anywhere, anytime, as users store data and software in remote centers.

Meanwhile, Daum is betting on its map service, as the majority of searches conducted on mobile devices are aimed at finding locations and directions.

Its latest creation is Store View, a more detailed version of Google’s Street View. Store View allows users to get a look inside stores of their choice on their smartphone screens without having to be physically present.

Daum has also introduced a number of search tools to distinguish itself. Its Barcode Search opens up a list of related search options simply by scanning the barcode of a product. Object Search provides a similar function by using digital photographs of objects or labels, for example on a bottle of wine.

“Our services are optimized for mobile phone use,” said Kim Ji-hyeon, the director of Daum’s mobile business.

“They are now being tweaked to make them even more convenient.”