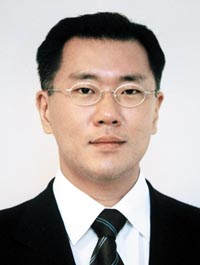 Hyundai Motor Vice Chairman Chung Eui-sun spoke of steering the brand in a new direction under the motto “modern premium” when he unveiled the new Azera at the Los Angeles International Auto Show on Wednesday.

Hyundai has been heavily pushing its premium lineup in the U.S. market including the Equus, Genesis and Azera.

The Azera, also known as the Grandeur in Korea, is the fifth model to adopt Hyundai’s design trend, represented by its “fluidic sculpture,” after the Tucson, Accent, Avente and Sonata. It will be launched in the U.S. market next year.

Under the leadership of Chung, the son of Hyundai Motor Group Chairman Chung Mong-koo, Hyundai has been positioning itself as an affordable luxury brand. Chung said Hyundai expects to sell 4 million units worldwide this year for the first time.

The Azera is equipped with a 3.3-liter direct injection engine connected to a six-speed automatic transmission that is capable of generating 297 horsepower at 35.3 kilogram-meters of torque.

The sedan can travel 9.8 kilometers (6.1 miles) on a liter (0.26 gallons) of gas and comes with nine airbags. It also features a Bluetooth hands-free and Blue Link telematics system that contains voice recognition as well as a remote starting function.

Meanwhile, Hyundai’s affiliate Kia Motors showcased its GT concept sports sedan, which was first unveiled at the Frankfurt Motor Show earlier in the year. The sleek, futuristic-looking sports car has a 3.3-liter engine capable of producing 395 horsepower at 54.4 kilogram-meters of torque.

Hyundai set aside around 1,410 square meters (15,000 square feet) of space at the Los Angeles Convention Center to show off its cars, while Kia reserved 1,670 square meters during the motor show that runs through Nov. 27.

Separately, Hyundai’s Avante, known as the Elantra in the U.S., received on Wednesday the highest prize among compact cars at the Residual Value Awards given by the Automotive Lease Guide, Hyundai said yesterday. The Avante received the award for the second straight year.