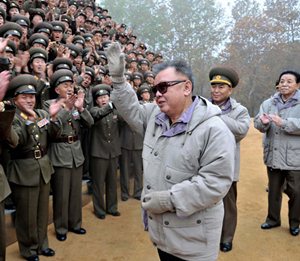 South Korea’s beefed-up efforts to prepare for an eventual unification of the Korean Peninsula are not intended to encourage the collapse of North Korea, Minister of Unification Yu Woo-ik said yesterday.

“I want to make it clear that we have no intention to harass North Korea or lead the North Korean system to collapse,” Yu said at the inaugural meeting of a South Korea-Germany committee on unification at a Seoul hotel. “Rather, we want to open the way for coexistence and co-prosperity and move toward a peaceful unification on the Korean Peninsula.”

During his visit to the United States early this month, Yu said that concrete actions were needed to prepare for unification, disclosing that his ministry was drafting a bill that would create a 55 trillion won ($48.7 billion) fund to pay for the cost of unifying the peninsula.

North Korea usually reacts sensitively to any discussion by the South about the financial costs of unification, suspicious that Seoul assumes a reunification would occur by absorbing the North, which the South denies.

Yu, who replaced hardliner Hyun In-taek last month as unification minister, has said he would maintain Seoul’s current policies toward the North, instituted after two major provocations against the South last year that brought inter-Korean relations to the lowest point in years.

The new minister, however, has stressed more flexibility as well, seeking stable dialogue channels with the North. The ministry also approved last week the resumption of medical aid to North Korea.

“What is urgent is establishing peace on the Korean Peninsula,” Yu said yesterday. “We can’t build a strong house of unification on top of shaky sands of peace.”

The committee was conceived as an intergovernmental cooperative channel on unification on the occasion of the 20th anniversary of Germany’s unification last year. The committee, which also includes prominent scholars from both countries, aims to meet annually. Twelve people represent each country at the committee.

According to the Ministry of Unification, the forum is closed-door except the opening ceremony, but De Maiziere and Joerg Schoenbohm, East Germany’s last vice defense minister, will give a lecture to students at Ewha Womans University today on Korea’s vision of a unified Korean Peninsula. Former Prime Minister Lee Hong-koo is also scheduled to take part in the event.