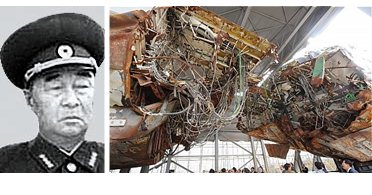 Veteran North Korean commander Kim Kyok-sik, who is suspected of directing the sinking of the Cheonan warship and shelling of Yeonpyeong Island last year, may have been replaced, a South Korean government source said.

If so, one interpretation is that North Korea is making a positive gesture to improve strained inter-Korean relations.

The 71-year-old commander of the frontline 4th corps army was appointed in February 2009 to the head the westernmost army in the strategically important city of Haeju, South Hwanghae Province, facing South Korea’s western islands.

Known to be close to North Korean leader Kim Jong-il, Kim served as chief of the Korean People’s Army general staff between 2007 and 2009.

Former South Korean President Chun Doo Hwan said in April 2010 that the 4th corps was in charge of the sinking of the naval ship Cheonan in March 2010, under the general’s command.

“On Sept. 9, when a military pageant was held to mark the founding of the North Korean regime, Commander Kim was seated separately from other generals,” the source told the JoongAng Ilbo on Wednesday.

“Recently, we witnessed an inauguration of a new commander for the 4th corps and a luxury foreign car appeared at the ceremony,” the source continued. “[Among many scenarios] we are weighing the possibility of his being replaced.”

For South Korea, the hawkish commander’s replacement could be a sign of the North trying to improve ties.

“Kim’s replacement could be in response to our constant demands for apologies and the North taking responsibility for provocations such as the torpedoed Cheonan warship and Yeonpyeong Island,” a government official said.

Some government sources suggested that Kim maybe have been made vice defense minister or deputy chief of the KPA general staff.

“When Kim was transferred to head the 4th corps in 2009 from being the chief of the general staff, some said he was demoted,” a source told JoongAng Ilbo. “However, it turned out later that Kim was in charge of an important task to direct a military clash between the two Koreas near the Northern Limit Line. It could be that he was assigned another important task from the North Korean leader.”