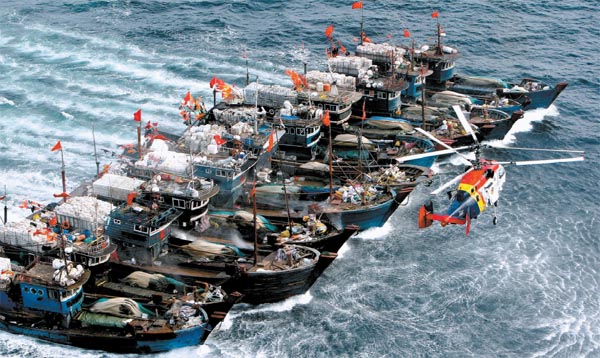 Chinese fishing boats, illegally operating in Korea’s exclusive economic zone, try to escape on Wednesday as a patrol helicopter of the Coast Guard’s West Regional Headquarters chases them in the Yellow Sea 160 kilometers (100 miles) west of Ochong Island in Gunsan, North Jeolla. The Coast Guard said it captured 12 of the 13 boats spotted and 126 Chinese sailors in the operation, which involved 12 patrol ships, four aircraft and 20 SWAT team members. By Oh Jong-chan

In a show of force, 12 patrol ships, four aircraft and 20 SWAT team members - armed with K5 handguns, shields and grenade launchers - responded to the 1:40 p.m. call from a patrol helicopter from the West Regional Headquarters of the Coast Guard. The team intercepted 13 fishing boats in Korea’s exclusive economic zone in the Yellow Sea, according to the Coast Guard. 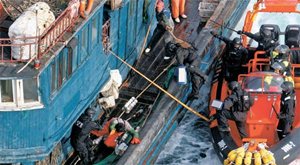 Korean authorities have been criticized for being too accepting of illegal Chinese fishermen, who have earned a reputation for being dangerously aggressive. In 2008, a member of the Coast Guard was killed while inspecting a Chinese fishing boat.

On Wednesday, 160 kilometers (100 miles) west of Ochong Island in Gunsan, North Jeolla, Korean sailors found themselves face to face with the trespassers in an escalating confrontation that lasted roughly 40 minutes. A JoongAng Ilbo reporter accompanied the Coast Guard Wednesday and witnessed the drama.

When the Chinese fishermen saw the Koreans coming, they tied their boats together into a large, floating block, using sharp spears on the perimeter of the ring to stave off the Koreans.

With their boats tethered together, the fishermen came out on deck prepared for a fight.

At 2:40 p.m., Captain Kim Guk-seong of the SWAT team made a decisive move. He sent 10 members of his team toward the left side of the flotilla with orders to seize the wheelhouses and take control of the vessels. At the same time, 12 patrol ships tried to distract the Chinese.

The plan seemed to work. The members of the SWAT team successfully boarded two boats and disarmed the sailors onboard, though the fishermen tried to fight back with bamboo spears and iron pipes. They surrendered after hearing warning shots fired by the Coast Guard.

In the middle of the operation, three boats detached themselves and tried to escape. But helicopters fired tear gas and halted them.

After 40 minutes of skirmishes, 126 fishermen and 12 of the 13 boats were in custody. One boat managed to escape. There were no injuries.

In the past, the Coast Guard has relied on water cannons and voice warnings via ship radio to confront illegal fishermen. The stronger response reflects a change in authorities’ approach toward what some perceive as a growing threat of illegal fishermen.

“I judged that putting out the SWAT team was the most effective solution because we had to handle the situation quickly,” Captain Kim told the JoongAng Ilbo. “We’ve decided to strengthen our attitude against illegal fishing as it is threatening many Koreans.”

He issued a warning to any fishermen who illegally enter Korean territory in the future.

“In the last few years, we’ve prepared for this operation by simulating many possible scenarios,” he said. “If illegal fishermen keep trespassing on our territory and threatening Koreans’ safety, they will be paid back for their actions.”