Voiceless, he writes to triumph over adversity

Voiceless, he writes to triumph over adversity 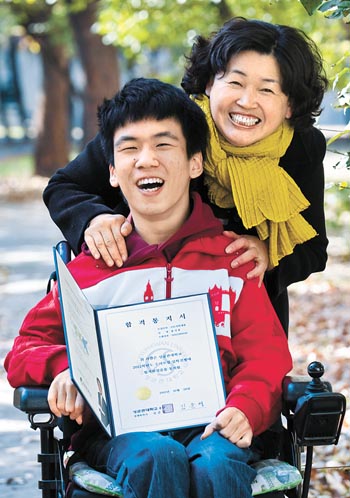 Hong Seong-hun holds up his acceptance letter from Sungkyunkwan University on Monday, sharing his happiness with his mother, Kim Ok-hui, in a park in Seongsan-dong, western Seoul. By Kim Seong-ryong

“Why do you like the literary arts?” a reporter asked Hong Seong-hun, 19.

Unable to speak, Hong moved his finger across the trackpad of his laptop. It had to suffice as his voice.

“I have limited opportunities to express myself,” he said, “but through literature, it is possible to convey a lot of ideas and emotions in one time. Through writing, I want to show my thoughts.”

Last month, Hong, who uses a wheelchair with only limited use of his arms, was admitted to Sungkyunkwan University’s College of Liberal Arts after applying through the school’s early admission program for talented applicants.

At the interview, Hong, as on this day, answered questions with his computer.

“In terms of achievements and academics, he does not fall behind students without disabilities, and his interview also received a positive evaluation,” said Jo Mi-suk, a Sungkyunkwan admissions officer. “Not only does he show strong will, but he also demonstrates talent as a writer.”

Behind Hong has been his mother, Kim Ok-hui, 47, whose tenaciousness and support were instrumental in her son’s achievements. Kim read aloud to Hong as a child, contributing her voice to her voiceless son and planting the seeds for what would become her son’s love for literature. Today, Hong says he aspires to be a novelist.

“The day we heard the news of [my son’s] acceptance, our whole family cried hard,” his mother said. “My husband, who was driving a cargo truck, said he cried while driving when he heard the news on the phone.”

Hong was born with his disabilities after his mother lost consciousness for three hours during delivery. His oxygen supply was cut off, resulting in severe brain damage.

But despite his physical limitations, Hong let his mind grow. He learned how to write on a computer and began keeping a journal in first grade. Even at a young age, his introspective prose and ideas made Hong stand out from his peers.

Hong has won six national writing contests, including the Association of Writers for National Literature’s essay writing contest. In 2010, Hong, along with national football players Ji So-yun and Yeo Min-ji, received the Korea Young Talent Award, presented by the Ministry of Education, Science and Technology.

Yet the road to college has been anything but easy for Hong. Last year, he was rejected from every school he applied to.

“There had never been a case where a student who won the Korea Youth Talent Award was not able to get into college until my son,” Kim said.

The schools had told her that her son’s disabilities were “too severe” to handle school life and declined to give him an opportunity to learn.

Growing up, Hong had faced discrimination at schools, which would often refuse to admit him or suggest that he attend a special education school.

His mother was adamantly opposed.

“He will have to face people without disabilities when he enters society, so from childhood, he should attend regular schools and learn how to mingle with his peers,” Kim said.

In his childhood journal, Hong once described his mother, who carried him up the school steps every morning, as having “cast iron arms and legs.”

“My mother is the person who has done almost everything for me,” Hong said, “but now I have to become independent, though I’m not sure I will be able to.”

Life for his family of six became difficult after Hong’s father was in a car accident in 2004. But after worrying about paying for college, Hong received word yesterday that Sungkyunkwan University would grant him a full four-year scholarship.