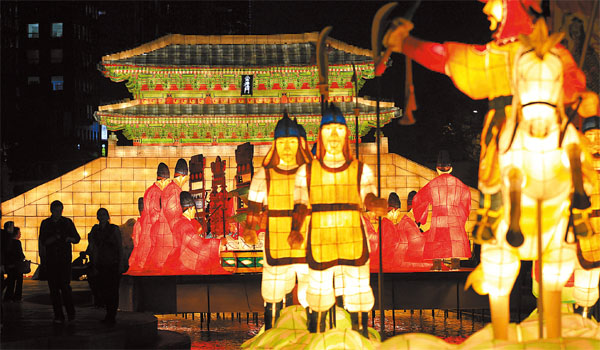 A group of visitors walk by a half-scale model lantern of Namdaemun Gate at Cheonggye Stream in central Seoul on Nov. 3, the day before the opening of the 2011 Seoul Lantern Festival. The festival features some 30,000 lanterns and ends tomorrow. [YONHAP]

As the autumn begins to fade, you might be thinking about bundling up against the cold and hibernating for the winter. But there are still plenty of lively festivals and exhibitions to get you out of the house.

From a festival that is lighting up the night to exhibitions of photography and the history of the nation’s capital, there is a lot going on in the city. But don’t wait until the last moment, because some of the events end tomorrow.


Lanterns light up the night

If you haven’t visited Cheonggye Stream recently, you may be surprised to find that it is covered in lights for the 2011 Seoul Lantern Festival. But you’d better hurry. The festival started on Nov. 4 and ends tomorrow.

This is the festival’s third year, but don’t expect it to be the same as last year because, according to organizers, about 80 percent of the lanterns are new.

In fact, the size of this year’s festival is bigger than ever with some 30,000 lanterns creating wonderful night views along the stream. The exhibition stretches 1.3 kilometers, 400 meters longer than last year, and goes from Mojeon Bridge near Cheonggye Plaza to Gwansu Bridge near Cheonggye 3-ga.

In previous years, the event has been one of the most successful festivals of the late fall season. The organizers expect this year’s festival to attract about 3 million visitors, an increase of 800,000 people compared to last year.

Under the theme of “Stories of Seoul’s Past through Lanterns,” this year’s festival aims to give visitors a glimpse of Seoul’s history and traditions through six sections: “This is Hanyang,” “The Joseon Dynasty,” “Everyday Life in the Joseon Dynasty,” “See the World,” “Fun Seoul” and the Seoul Creative Lantern Contest, featuring exhibits created by Seoul citizens.

“We can make a very interesting and long-lasting vision with our history,” Park Jae-ho, the director of the festival, said. “It is the perfect place for family and friends to enjoy a fantastic night view that is created by lanterns and the Cheonggye Stream.”

The section “This is Hanyang,” located near the Mojeon Bridge, features an 18-meter tunnel of lanterns made up of over 3,000 cheongsachorong (traditional Korean lanterns with a red-and-blue silk shade). It also features a big lantern of Seoul’s mascot, Haechi.

The “Joseon Dynasty” section, which stretches from Mojeon Bridge to Gwangtong Bridge, is recommended for students and Korean history buffs because the lanterns in this section display a brief history of the Joseon Dynasty (1392-1897).

The highlight of this section is a half-scale model lantern of Namdaemun Gate (also called Soongrye Gate). The organizers said it took about three months and about 50 people to make the lantern, more time and manpower than for any other lantern in the festival. The “Everyday Life in the Joseon Dynasty” section, which runs from Gwangtong Bridge to Jangtong Bridge, is recommended for senior citizens as the lanterns in this section depict traditional games such as jegi-chagi (Korean footbag) and other aspects of traditional life.

More than 30 lanterns that were awarded prizes in the Seoul Creative Lantern Contest will be displayed from Jangtong Bridge to Samil Bridge. The contest, held by the Seoul Metropolitan Government, was held in August and covers two categories: traditional lanterns and creative lanterns.

The “See the World” section, from Samil Bridge to Supyo Bridge, displays small lanterns representing 20 countries. There is a small model of the Statue of Liberty and the Leaning Tower of Pisa as well as lanterns from the Japanese prefectures of Goshogawara, Aomori and Yuzawa.

The “Fun Seoul” section near Gwansu Bridge will likely be popular with children, as it features lanterns of popular animated characters such as Batman, Spiderman, Superman, Pororo and an 8-meter tall Robot Taekwon V.

This year’s festival also offers a variety of hands-on programs that let visitors make lanterns and other crafts. This event takes place at the Gwanggyo Gallery from 5 p.m. to 10 p.m. daily. The cost ranges from 1,000 won (88 cents) to 5,000 won.

There will also be several performances of traditional Korean music and dance.

The organizers said that safety is their first priority for this year’s festival. Last year, there was no division between the entrances and exits, but this year, visitors can only enter at three places - Cheonggye Plaza, Samil Bridge and Sewoon Bridge. The exits are at five places - Cheonggye Plaza, Gwang Bridge, Jangtong Bridge, Supyo Bridge and Gwansu Bridge. Visitors will also be directed to walk in one direction on each side.

World of photography
People who are interested in photography will want to check out the Seoul Photo Festival 2011. Organized by Seoul City Hall, this is the second year of the festival, which continues until Nov. 30 with the participation of 30 galleries and museums. To attract a broader audience for the festival, Seoul has declared this month “Photo Month.” The city says it hopes the festival will eventually become an international event like Les Rencontres d’Arles in France.

The works of 22 photographers are on display at the Seoul Museum of Art in Seosomun-dong, central Seoul, as part of the Seoul Photo Festival 2011. The festival ends Nov. 30. Provided by ArtPark

Under the theme “The Detour of the Real,” this year’s main event will be held at the Seoul Museum of Art (SeMA) in Seosomun-dong, central Seoul, and features the work of 12 prominent photographers from eight countries, including Gregory Crewdson and Christian Vogt, as well as 10 Korean photographers.

Starting today, the museum will also display the works of 50 amateur photographers chosen earlier this month by four renowned photo experts from abroad, including Vicki Goldberg, and 16 domestic experts.

Visitors have an opportunity to participate in the festival through the Smartphone Photo Exhibition, which displays photos taken by the public on a 27-inch monitor installed at SeMA Gyeonghui Palace.

To submit a photo, send it to smart@seoulphotofestival.com on the day before your visit. Photo files should be formatted as “(your name)_(your cell phone number).jpg,” The organizers will give one festival catalog to one participant per day and will present digital cameras to three people after the festival ends.

The festival also offers lectures and conversations with the artists. Photographer Kim Joon-woo will speak about how to take good photographs on Nov. 26 at SeMA in Seosomun-dong at 11 a.m. Photographer Back Seung-woo will talk with visitors later that day at 4 p.m.

Looking back on old Seoul
The Seoul Museum of History is aiming to attract history buffs with its “Seoul’s City Walls: A Special Exhibition,” which has exhibits on the history of Seoul’s castles and city walls. It ends tomorrow. 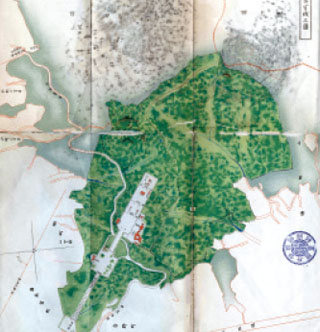 A map from the Joseon Dynasty shows a castle and fortress wall. Provided by Seoul Museum of History

Archaeologists have been working hard to prepare this exhibition, through which they will show the significance of the city walls in the present day, according to the museum.

The exhibition is divided into four sections and shows how the city walls were built and managed in the early days. It also shows the damage the walls incurred during the Japanese colonial era (1910-1945) and how they were restored.

Some of the artifacts on display, including old maps, rubbings from ancient monuments and historical letters, will be on display for the first time since their excavation from newly discovered sites.

The exhibition closes with a display of more than 300 images showing the walls throughout history.