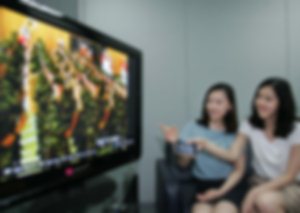 IPTVs, or Internet Protocol TVs, are now in a difficult situation. Subscribers rise, but the businesses continue to lose money.

These TVs deliver television and movies as well as other multimedia content via broadband Internet networks. The biggest difference from conventional TVs is that people have control - they watch programs whenever they want to.

It was KT - the country’s largest fixed-line operator and the second-largest mobile operator - that first ventured into this new business. The company introduced IPTVs to Korea in November of 2008. 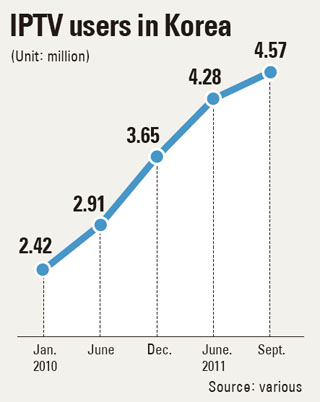 Back then it was thought of as the new growth engine for telecom companies struggling with the saturated Korean mobile market. The business made impressive growth in the past three years and today about 5 million Korean households are thought to have IPTVs.

“The biggest strength of IPTVs is the rich content. For instance we offer more than 100,000 on-demand-videos,” said an official with KT. “There were complaints initially such as slow or fragmented video, but as we solved these problems subscribers continued to surge.”

Olleh TV subscribers at KT - the market leader - totaled 2.84 million as of September of this year. Olleh TV is KT’s IPTV service brand.

But in fact, IPTVs have become the source of headaches for Korean telecom companies. They are a burden on their networks and their budgets.

Olleh TVs raked in 73 billion won ($64 million) in sales in the second quarter, but still haven’t reached the break-even point. It’s a similar tale for LG U+ and SK Broadband.

So why such a paradox?

The culprit, sources say, is the content, which initially was the very strength of the business.

“We spend somewhere between 65 and 80 percent of the sales in buying content,” said an official at one of the telecom companies who wished to stay anonymous. “It’s inevitable because the whole selling point of the IPTV business was to foster the content business in the economy and to offer rich content to consumers.

Insiders say they pay especially big bucks to terrestrial broadcasters such as MBC, KBS, and SBS for their programs. But they also pay hefty sums of money - up to 45 percent of their sales - to program providers and content providers. Adding to the worries is the heightened competition in a market that is lowering subscription fees. Recently KT released an IPTV service package with just an 8,000-won monthly charge. Sources in the rival companies say that the price is “just unreasonably low.”

There is also the emergence of “smart” TVs - which not only have Internet connectivity but application functions like smartphones and tablets.

Deemed the new-generation TVs, market researcher DisplaySearch forecast one in every four TVs sold worldwide would be a smart TV this year. “We expect that in 2015, 35 percent of 46-inch or larger TVs in North America will be smart TVs,” the company said in a report.

While insiders downplay the threat saying that “there are different consumer bases for IPTVs and smart TVs,” observers say it is critical that IPTV service providers should seek countermeasures before it’s too late.

“The general mood within our company is ‘let’s wait and see for a little while longer,’?” said Lee Yeong-su, a vice president at LG U+’s media business unit.