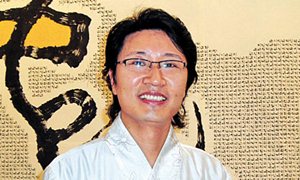 A Korean calligrapher and map artist who has been trying to spread messages of peace to the world through his art was named an honorary ambassador of world peace by the Korean government in early November.

Han Han-guk, 43, produces maps consisting of Korean words and phrases put together in the shape of a country. He has made 21 maps in all and each one contains letters, poetry and Bible passages that Han collected from people in the countries represented.

Han said he began making the maps to spread his message of peace to the world, adding that he hopes that people will one day stop generating meaningless disputes that incur unnecessary sacrifices.

“In collecting messages from people around the world for my art, I’ve been very surprised that everyone has the same hope, regardless of their nationality, ethnicity, religion or culture,” Han said in an interview withe the Korea JoongAng Daily on Tuesday. “They all want to live in a place without religious or national disputes. I wanted to let them know that they have the same ideas.” 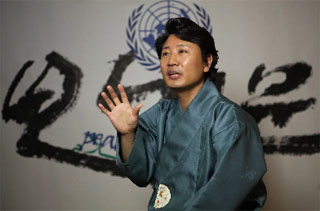 Artist Han Han-guk, 43, explains the idea behind his peace maps, which he created to emphasize the importance of world peace. Provided by the artist

He also said it was important to him that the maps contain the history and culture of each country, which he said he believes are the keys to promoting world peace.

Han started studying calligraphy when he was eight years old. He began by studying Hanja (Chinese characters) but switched to Hangul after feeling limited by his ability to express Korean culture and emotions through Chinese characters.

“I wanted to learn and practice something that would allow me to express my pride in my mother country and for me, that was Hangul,” Han said. “Through calligraphy, I wanted to work on the subject of peace and reunification of my country, which is the long-cherished dream of Koreans.”

Financial problems made it difficult for him to continue his study because the cost of the necessary materials, including hanji (traditional Korean mulberry paper), were too expensive for him. Not to be deterred, Han came up with his own method of study.

“I threw my brush away and grabbed a stick and I used the sand at Haeundae beach in Busan as paper,” Han said “People at the beach whispered to each other and stared at me as if I were a crazy person, but I couldn’t stop practicing because it was the only thing I could do.”

Han started making peace maps in 1997, and set out to produce nine maps representing Korea’s nine provinces. He completed the project in 2005. The finished map is 1.6 meters tall (5.2 feet) and 2.6 meters wide and has 138,000 Hangul letters. The text in the maps consists of messages expressing his desire for peace, national unity, forgiveness, patriotism and reunification of the two Koreas. Some also contain stories by families in South Korea separated from relatives in the North.

In 2008, the map, which he titled “We Are One,” was sent to North Korea. It is currently on display at the International Friendship Exhibition Hall on the North’s Mount Myohyang.

Next, Han set out to produce maps of United Nations member countries, including the United States, Japan, China and Germany. He ended up creating 21 maps in all containing 1 million Hangul letters. He also created 21 ceramic plates featuring images of the peace maps that he said he wanted to donate to the peacekeeping organization. But it wasn’t an easy task.

“I wanted to donate the ceramic plates to the United Nations in order to share my message, but the UN turned me down several times because they interpreted my actions as political or because they thought I was just doing it to draw attention to myself,” Han said. “But I couldn’t give up because I believed that sending my art into the world was my destiny.”

Han said that he also set up a small table with some of his works in front of the UN General Assembly in New York to show his sincerity.

“I stayed true to my intention of spreading my message of peace, not only as an artist but also as a person living in a divided country,” Han said.

As a result of his persistence, 21 offices of UN representatives finally accepted Han’s artworks. Since then, he has received certificates of receipt from each country acknowledging his contributions. Han said that the certificates are preserved in the Ministry of Culture, Sports and Tourism and the Ministry of Foreign Affairs and Trade.

Han said he is currently working to produce 35 more maps and is willing to take requests from countries interested in having a Hangul map of their country.

“I will keep producing the maps in order to spread the message of peace, which is the world’s long-cherished desire,” Han said “I hope that I can devote the rest of my life to producing these maps.

“I’m currently working on producing 35 country maps and I’ll be happy to produce more for any country that is willing to have one.”