CEO makes a business of music

CEO makes a business of music 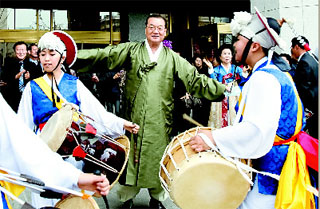 As chairman of Crown Haitai Confectionery Group, Yoon Young-dal is an unlikely patron of traditional music. But under his leadership, his company has made promoting traditional music a priority through corporate sponsorship of performances.

Yoon says his goal is to make traditional Korean music more accessible to people around the world.

Until last year, the company hosted the Changshinje event twice a year. But this year, Yoon decided to double the number of performances to four in order to present a more diverse variety of traditional music.

He is also hoping to give traditional musicians the kind of opportunities that K-pop artists have.

“K-pop groups get requests from foreign composers to record albums. It should be the same for traditional music,” Yoon said. “Wait and see. One day, famous orchestras from Berlin and New York will perform Korean traditional melodies. I will make it happen.”

In Korea, his passion for traditional music is channeled into a performance series called Changshinje, which features music such as pansori (narrative singing) and drumming alongside demonstrations of taekwondo and traditional dance.

Crown Haitai has sponsored the event every year since 2004 for its clients, most of whom are owners of small supermarkets.

At the seventh such event, held Nov. 4 to 8 at the Sejong Center for the Performing Arts in central Seoul, the event featured pansori maestros Ahn Sook-sun and Lee Choon-hee and was attended by 12,000 Crown Haitai clients.

“Changshinje is part of my effort to develop traditional music into a new form of performing arts by combining it with modern art trends,” Yoon said.

Yoon arrived at the event looking distinguished in his durumagi (a full-length traditional Korean jacket) and took a seat in the far left corner of the front row.

Although he was the host of the evening, he politely declined to sit in one of the VIP seats in the middle of the house. Instead, he chose to sit in a place where he would have to crook his neck to see the stage, in a gesture meant to show the company values its clients.

He said he had also chosen that seat to feel more like a participant in the performance. In traditional music, audience members typically sit on the floor with the musicians, oftentimes singing and dancing with them as well. At the first Changshinje performance of the year, Yoon even appeared on stage with a pungmul (folk music) band and danced merrily to the music with them.

The company has also sponsored concerts for masters of Korean music at Jeongwol Daeboreum (Great Full Moon), a holiday celebrating the first full moon of the Lunar New Year, since 2008.