Korean food crew dishes it out in NY

Korean food crew dishes it out in NY 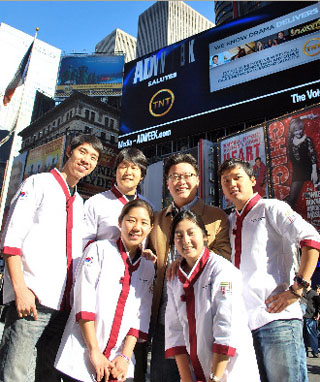 NEW YORK - The Bibimbap Backpackers, a team of five whose mission is to share Korean food with the world, stood in front of the red TKTS booth in the center of Times Square in New York City on Nov. 13 handing out bowls of the traditional Korean dish to a crowd of curious New Yorkers and tourists from all over the world.

The group is in the midst of an eight-month, 30-country tour that started in China in April and has since taken them to Thailand, India, Spain, Canada and Brazil.

“In cities without a Korea town, the recognition of Korean cuisine is low,” Kang Sang-gyun, the team leader, said in a telephone interview with the Korea Daily, the JoongAng Ilbo’s New York newspaper. “But with this opportunity, we hope to make more people aware of the excellence of Korean cuisine.”

In New York, they served 100 bowls of the dish, a mixture of rice and seasonal vegetables and sometimes meat or egg, that is served mixed with spicy gochujang, red pepper paste, and sesame oil.

The five members of the group - which in addition to Kang includes Kim Myeong-sik, Jung Gyeo-un, Park Hyeon-jin and Kim Su-chan - are all in their early twenties to early thirties and all five members quit their jobs earlier this year to carry out their mission of sharing Korean cuisine.

The group promotes itself mainly through social networking services such as Facebook and Twitter, which also triggered national interest in their project.

The group is sponsored by CJ Foodville Corporation, which provides ingredients such as gochujang and sesame oil, and the Ministry for Food, Agriculture, Forestry and Fisheries. They have also been appointed as “Korean food representatives” by the Korean Food Foundation.

The group’s adviser is Seo Kyoung-duk, 37, a professor at Sungshin Women’s University and a public relations specialist. Last November, he launched a series of bibimbap ads in Times Square for the MBC variety show “Infinte Challenge.”

“Our greatest achievement so far is that we have made 8,000 foreigners aware of bibimbap,” Seo said. “And we will continue to show the excellence of bibimbap and healthy Korean cuisine to even more people worldwide.”

The group, which has been on tour for eight months, has plans for a second tour next year and hopes to make it an annual event.

They will continue on from New York to make their way through the United States to Washington, Boston and Philadelphia, and will return to Korea early next month.